More memories. Jane and I first came to Tenerife in March 1977. Jane was pregnant. We stayed in the dreaded Playa De Americas at the Hotel Tenerfe. We spent most of our time by the pool, but after about a week the worlds worst ever air disaster happened at Los Rodeos Airport in the north of the island.

We realised something was wrong when half the hotel’s staff disappeared. We later discovered that they had gone north to help. Those old enough to remember it, will recall that there had been a bomb explosion at the airport on Gran Canaria and flights were diverted to Tenerife. There were so many planes that some were parked on the runways including the Pan Am and KLM 747’s involved.
By the time the Gran Canaria airport was opened, it was foggy in Tenerife. The Captain of the KLM 747 thought he has cleared to leave and hit the Pan Am plane killing nearly 600 people.
We were due to fly home about a week after the accident, but as the airport was closed, everyone had to be ferried to Gran Canaria to get home.
We have been back to Tenerife for golfing holidays on a number of occasions since.
This time we were docked in Santa Cruz, in the north, and as we approached the town we found that we had joined the Tenerife Marathon. The whole Waterfront area was packed with runners and their supporters. It was sunny and hot, but that didn’t appear to deter those taking part. It was a great occasion. 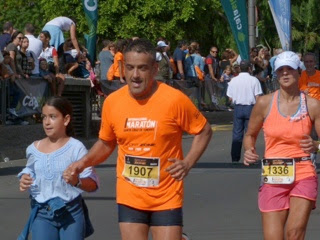 Jane inevitably wanted to find the shopping area. I tried to avoid it, but failed. There were the usual mime artists in the main street, but by far the best were 3 girls in a box with just their heads showing. They were hilarious, making weird and frightening noises as people passed, particularly if they did not donate! 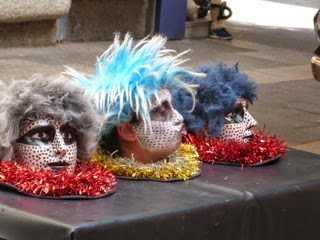 After returning to the ship, Jane decided to have a rest and I decided to eat. I found a table with just one person sitting at it, and when I sat down realised that it was Murray Walker. He was delightful with plenty of stories to tell. It is clear that although he made his name with motor car racing his true love was and still is motor cycle racing.
While we talked, other passengers came up to talk to him. Did he remember this? Did he remember that? He said he did, although I wasn’t so sure. But he still has a fantastic memory for dates and places and people, despite his 91 years. He certainly doesn’t look that age. 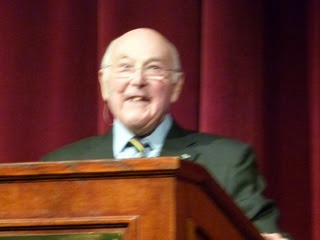