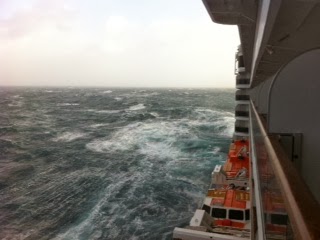 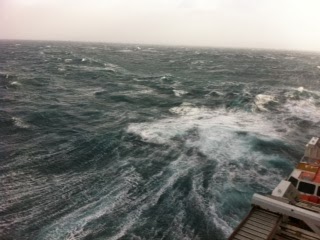 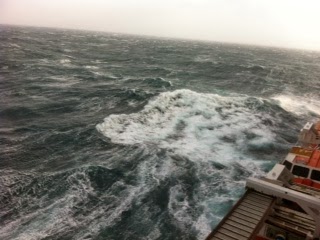 We are still not out of the storm that has spread itself across the whole of the North Atlantic. At times we have been travelling at only 3 knots according to Captain Philpott but yesterday we made massive progress and at noon were some 70 miles south of the Azores and heading on a more westerly course.

The largest wave recorded by those on the bridge on this voyage was a gigantic 18 metres high. No wonder there are a large number of empty seats in the dining room in the evening.

Last night we were woken during the night by an almighty crash. Bottles had gone flying in our room  but the only casualty was a broken champagne flute.

We have attended a series of parties in the Queens Room and Jane’s rising wheelchair is already a great success. At the press of a button she is at the level of those standing alongside her.

We are approaching the Mid Atlantic Ridge having made substantial progress. The wind is now gusting at only 40 knots and it is anticipated that we will have cleared the storm by tomorrow. The swell is now down to 5 metres so the signs are good. 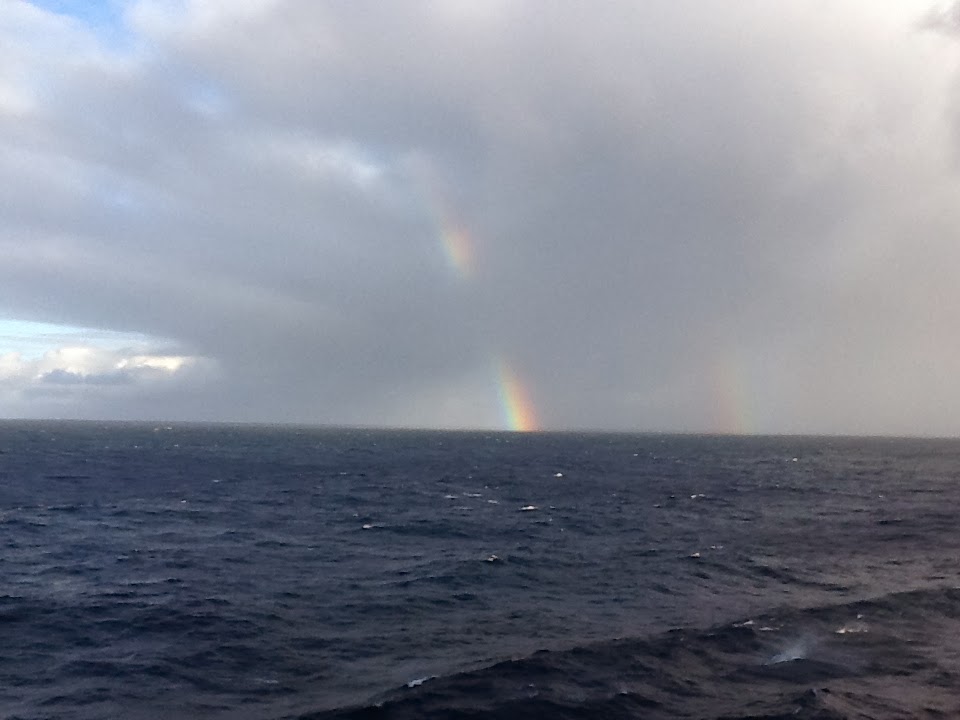 Share:
The sun shone a little and the seas settled down with only a smallish swell. And on the seventh day there was continuous sunshine, a temperature of 24C and a calm sea. But compare that with Queen Mary 2 in New York just a few days ago! 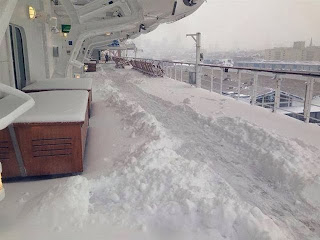 For the last 3 days the weather has been lovely. Calm seas with a slight swell, gentle following winds and plenty of sunshine. The Queen Victoria has been speeding west at 18/20 knots and eating up the miles to Florida.

It has been a week of parties – four in all, including a full World voyage party and the Senior Officers party. At the latter party last night, I was searching for a second glass of wine and returned to find Jane in conversation with the very amiable Master of the ship Captain Peter Philpott. We had not met him before because he transferred to Cunard from P&O last year after we were last on this ship. He is a great ambassador for Cunard and a natural with a microphone in his hand. And a sailor supreme having guided the ship safely through a storm that he said ranked in the 5 worst storms that he had encountered during the whole of his career at sea.

The lengthy period at sea has meant that the on board lecturers have been very popular. One man in particular has given a number of excellent presentations – Adrian Hayes (www.adrianhayes.com) – who describes himself as an adventurer/explorer. He is an Englishman who lives in Dubai and his claims to fame include treks to the North Pole, the South Pole and to the top of Everest in the shortest time span ever. He is a motivational speaker and has given a number of excellent talks supported by brilliant videos.

I have just looked him up on Wikipedia and have discovered that he went to school at St Marys College, Southampton! I must seek him out before he leaves the ship in the morning.

On Sunday we arrive in Port Everglades for Fort Lauderdale. In the region of 1000 passengers who joined the ship for the first segment will leave and a similar number will board in their place. Presumably the newcomers will, in the main, be American.

Jane and I will be meeting up with Chris and Jenny Branston who are Uni friends from the sixties. I was their best man when they married soon after we graduated. They have lived in the US since they both retired, although they have owned homes in Florida for much longer than that. They will drive through the Everglades from their home outside Naples, on the Gulf coast.

Earlier this week I received an email from Roger Bialcik in Chicago, who I met when I was working with Julian Avery in Milwaukee in the summer of 1965. Roger and I have kept in touch over the years and have met from time to time in Chicago and Milwaukee and also in the UK. Roger had received our Christmas card telling him of our World Voyage and emailed us to wish us well. He said that he was taking his first cruise this month, leaving from Miami on 12 January – the very day that we arrive just down the road in Fort Lauderdale. It must be 10/15 years or so since we last met. Fate has put us in the same place on the same day, so we hope to have coffee or lunch together before he boards his ship and sails off to the Caribbean.

Apologies for the lack of photos but iCloud is misbehaving.

The immigration authorities at Fort Lauderdale performed as they usually do – very slowly. There were not enough of them and some of our fellow passengers had to wait three and a half hours before they could leave the ship. We were lucky because Jane was in her wheelchair and the US authorities do give preference to those in wheelchairs, but despite that it still took us just over an hour to get through.

Chris and Jenny Branston were waiting for us as we emerged from the terminal building. Then it was off to the Intercontinental Hotel, Doral in Miami to locate Roger Bialcik. That was easy and Roger emerged from the hotel as soon as we arrived. We think that it was 17 years since we last met but our memories are not as good as they were. Chris drove us to the old Pan Am Terminal building on the waterfront – now the Miami City Hall. an Art Deco buiding. It was by the water because the original Pan Am planes were seaplanes and the would taxi across the bay to the terminal ashore.

This is a better photo of the City Hall. After lunch we took Roger to the Miami Seaport where we spotted Carnival Glory and on arriving at the terminal found Roger’s brother Larry and the rest of their group. They had about 10 minutes in which to board their ship, but all seemed very laid back about it. Had it been me I would have been there 4 hours earlier!

We then drove back to Port Everglades and the Queen Victoria. A lovely day.

I woke to see the sun rising over Bridgetown, as we approached the island of Barbados after three days at sea.

After we made fast on the main berth, I noticed a large crane bearing the name LIEBHERR and was reminded of Nicola Cortese’s fallout with Katharina Liebherr a few hours earlier. Southampton Football Club appeared to have achieved stability but in hindsight I suppose it was inevitable that the owner of a multi million pound business could not allow the existing regime to continue to run it as their private fiefdom. But I digress! Royal Caribbean’s Jewel of the Seas followed us in and moored against the harbour wall. She was on a 7 day voyage from Puerto Rico around the Caribbean.

My favourite place for watching us arrive and depart is just above the bridge. Few passengers know of it or how to access it. I regard it as my private deck and tell very few people how to find it!

Once ashore, our plan was to find a taxi and head off to the Orchid Farm that we had not visited before. Outside the terminal building a driver spotted the wheelchair, said that he had a 12 seater and 2 spare places and a wheelchair lift. He agreed to take in the Orchids as part of the tour. Perfect. Once we were loaded in we headed north, up the West side of the island, past the Kensington Oval, out of the Parish of St Michael and into the Parish of St James. We passed the luxury hotels where many of you will have stayed and arrived in Holetown. Jane and I remember it because we celebrated our 25th wedding anniversary there at the Glitter Bay and Royal Pavilion both of which have apparently seen better days, according to a local lady.

The first settlers landed at what is now Holetown in 1626 and a wooden church was built there almost immediately. It was replaced by a coral-stone building in the early 1680’s and it is still there today as the Parish Church of St James. We then headed inland through lush farmland and rose up to one of the highest points on the island. From Highland we had magnificent views of the east coast, known as the Atlantic Coast. The cattle in the fields around us looked to be very well fed beasts in terrific shape. The roads were steep and narrow and we passed sugar plantations – sadly no longer a major source of revenue for the island. Although we did not visit it on this occasion, we were near to the Francia Plantation owned at one time by our friends the Sisnett family.

We then travelled south to Orchid World. Set on a hill, it was not easy to negotiate with a wheelchair, and to put it mildly, the orchids were not very impressive. The display at Asda, Chandlers Ford is always better than this! Jane will report separately in her blog on accessibility.

We then headed south to Bridgetown and back to the ship to hear the Captain announce that we had 1735 nautical miles to cover before reaching our next port Fortaleza, Brazil.

Apologies for the lack of photos, but the internet is very, very slow today and it is impossible to download the Barbados photos which will follow in time! 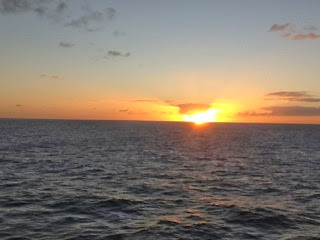 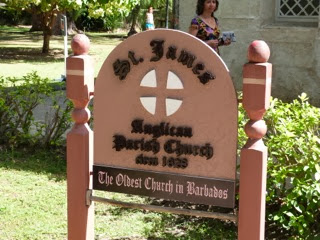 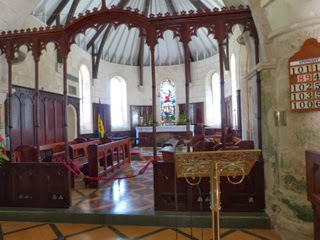 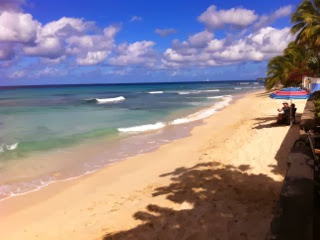 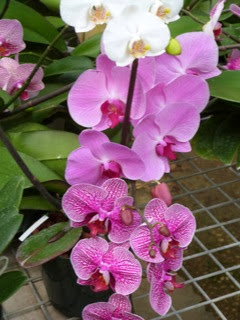 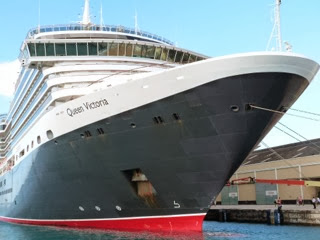