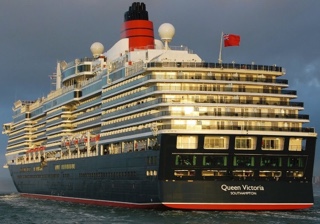 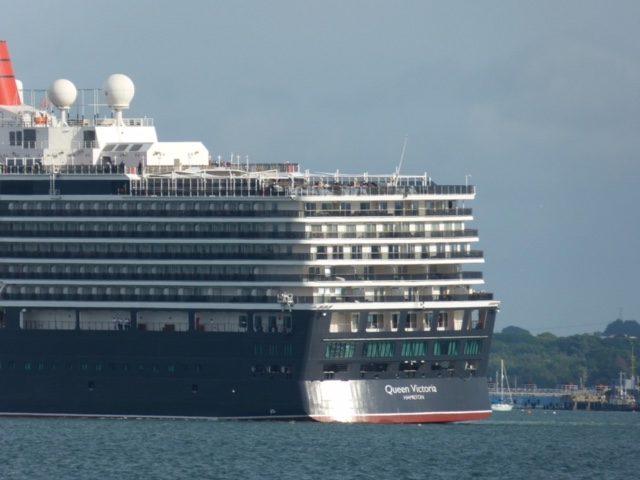 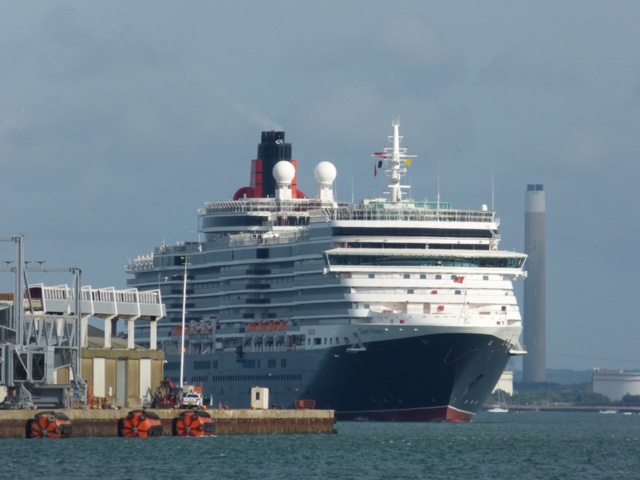 QV looked really great as she came into the Port of Southampton on Saturday. Here are some photos.

This is the new version of Smithys Cruise Blog. I have moved from Blogger.com as Google no longer support it and it crashes. I have a marvellous coach who helps me whenever The technology defeats me.

We board Queen Victoria on Thursday morning and it is important that I have mastered this format by then. But there is the small matter of packing for two and leaving the house in a presentable state for house sitter Linda. So bear with me!

That worked! Queen Victoria arriving in Southampton on Saturday, sporting her new shape (at the stern which you cannot see from this angle). More photos later.

QE2 is fondly remembered by thousands of Cunard supporters. Many still crave information about her and her future as she floats alongside her berth in Dubai. Rumours abound and no doubt before long we will know what is to happen to her.

As a result of my Cunard family connection, I am from time to time sent a variety of pieces of Cunard information and recently I was sent a link to a YouTube video entitled “QE2 – The Last Great Liner”. I started to watch the film, which was telling the story of the construction of the ship and the fact that QE2 broke down on her sea trials. After she  struggled back to Southampton, Cunard refused to accept delivery and there was talk of her being sold.

The film showed the work that was done to strengthen the faulty turbines, thereby resolving the issue. And then, on the film, up popped my late father, Captain George Smith standing on QE2’s bridge. For years I have trawled through old film of Cunarders hoping to see images of the old man but have never managed to spot him. And there he was, on the day Cunard accepted delivery of Queen Elizabeth 2, just as I remember him. These are stills from the film. Father has the four stripes and the bearded chap in the grey suit is Captain Bil Warwick. His son Ron Warwick became a Cunard Captain and was also Captain of the QE2 before becoming the first Captain of Queen Mary 2 and Commodore of the fleet.

If you search YouTube for “QE2 – The Last Great Liner” and then fast forward to the 20th minute you will find the moving images. After I had I sent the link to my sister Liz she said she felt somewhat emotional when she watched the film. Father died more than 30 years ago and as we didn’t have cine cameras in the family at that time, there will be very few moving images of him.

We are on our way to Madeira and the Canary Islands and the blog is a new one supported by WordPress. My earlier blog was with Blogger. com, but without telling me, decided not to support it. As a result it kept crashing.

So here we are on board Cunard’s remastered Queen Victoria, escaping the upheaval at home. I kept waking up last night, watching a few excruciating minutes of Sky News, and then falling back to sleep. The Tories only have themselves to blame. The own goal of the season by Teresa May.

Remastering this new format will take a little time, but if you get email alerts, they should continue. If you want to receive alerts, it is easy to sign up for them.

This is another test. The blog was vanishing into the ether because of my incompetence, but Sam in N London has recovered them. If you receive this by email, could you please email me just to let me know? richardghsmith@gmail.com Funchal today has been fantastic. I will let you know more tomorrow.

We first came to Madeira in January 2004 on the Queen Mary 2 Maiden Voyage. Madeira was the first port and our arrival in Funchal was dramatic, with thousands of people lining the harbour to welcome the worlds largest liner. There were even larger crowds when we left.

On that and subsequent visits to the island, we have taken tours from the ship, but as the tour offered this time, with an adapted vehicle, was identical to the last time we were here, we decided to do our own thing. It worked out really well because the taxi driver who was next on the rank was a charming man called Martin.

Martin had a nice shiny yellow Mercedes. Our original plan was for him to take us to the Santa Catarina Park

and another botanical garden and then to return us to the ship. But he was so caring and his English was so good that we asked him to take us a tour. We saw areas of Funchal that were new to us. He look us to a number of small villages in the hills and to Europes highest sea cliff where you stand on a glass platform with the water immediately below you.

Martin dropped us off in the middle of Funchal, which we explored for the first time. It was fascinating. We wandered up and down narrow streets, through the market and eventually walked back around the harbour to the ship. In total we had been away from the ship for just over eight hours.

We arranged for Martin to collect us from the ship at 9.30 next morning.

Martin arrived at the moment that we walked out of the terminal. His suggestion was that we should drive to Machico, stopping at viewpoints on the way. We had to be back at the ship by 12 noon, so time was of the essence.

The motorways in Madeira are amazing and some of the tunnels through the mountains stunning. Journeys that used to take 2 or 3 hours can now take as little as 20 minutes. Martin quickly reminded us that that was one of the reasons why the island is 6 billion euros in debt!

The first vantage point looked down on the airport and almost immediately we could see a plane approaching. It negotiated the short runway without any difficulty. As you will probably be aware, the extension to the runway, built on stilts, is another contributor to the islands debt. Apparently the airport is still regarded to be one of the worlds most dangerous.

We then drove to Machico where it is said that Captains Zarco and Teixeira first landed on discovering Madeira. A lovely small town with a harbour a couple of smallish hotels and a gentle relaxed air about it. The beach was sheltered and covered in yellow (imported) sand.

After an excellent coffee while overlooking the harbour, we returned to the taxi and set off for the ship knowing that any traffic problems would mean that we missed the 12 noon deadline and would incur the wrath of the Captain! We made it with 10 minutes to spare but were the last and the gangway was removed once we were aboard.

I forgot to mention that on Monday afternoon we investigated parts of Funchal that we had not seen before. Earlier visits had taken us straight out of the City. Martin had shown us the area where the best hotels are. Amazingly the Savoy hotel has been knocked down and a massive hotel is being built in its place. A local man, Dionisio Pestana, is developing the site and wherever you look there is a Pestana hotel – in the region of 15 in Madeira.

After leaving Martin we explored the back streets on foot. Bars and eateries wherever you went. Most of the doors carried artwork. It seems that the owners clubbed together and brought in artists to decorate the doors. Some examples