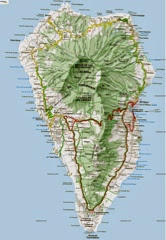 This island should not be muddled with Las Palmas in Gran Canaria. “We have not been here before” I told everyone. Jane thought otherwise. But of course I know best.

As we went ashore we knew that this was one of the smallest islands in the Canaries, but that it was the steepest and boasted that it has the highest mountain.
As we meandered up the main street, Mrs Smith said she recognised some of the shops. Shoe shops look the same all over the World. And the boutiques. Some of our friends were returning to the ship because of some black clouds hovering over the mountains. They were sure they heralded rain. 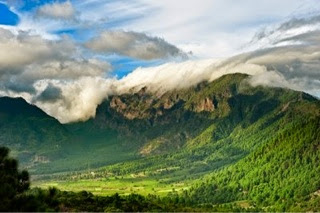 Being an authority on all things Canarian, I told them that the clouds had been hanging about all morning and that that occurred on all the Canary Islands we had visited over the years. The prevailing winds push the clouds up against the mountain, but that didn’t mean that it would rain. As it happened I got that bit right.
But further up the main street we came across a familiar looking square. 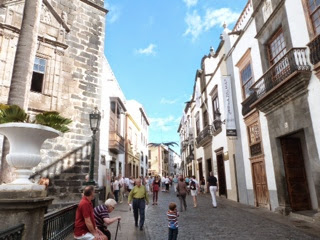 I said nothing but Mrs Smith insisted that we had been there before and said she recalled photos we had taken of the square and the buildings surrounding it. I had to protect my position and said nothing, but after turning a corner we spotted a row of coloured townhouses. 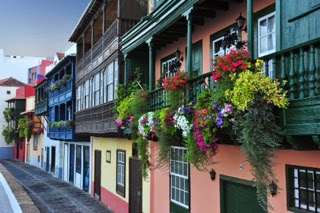 I had to admit that I was wrong. We had been to La Palma before. It must have been on tha maiden voyage of Queen Elizabeth. It must be an age thing. Mrs Smith is, of course, much younger than me.

And talking of the age thing, that good friend of mine, Michael Yeomans, celebrates his 70th birthday today. Seven of us, including his three sons, celebrated the occasion in London before the cruise. Too much red meat and Malbec at the Guildhall Hartsmoor! A great occasion.
Share: