This week the parties have come thick and fast. The Cunard World Club party for frequent travellers and two days later the Senior Officers party. Exactly the same format for both, with the Commodore making a brief speech at the end to signal the fact that it was time to leave the free alcohol and go to dinner!

Jane was able to use the handy little table and wine glass holder that Mike of Remap had made for the wheelchair. This is Jane showing it off to Deputy Captain Simon Love. 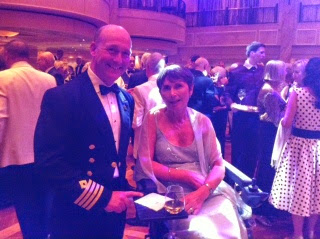 We struck really lucky with our table companions for this voyage. Annette and Andy from a village near Sheffield are avid cruisers. They have sailed with a wide variety of cruise lines over many years. Andy has his own business dealing in gas. He was originally employed by British Oxygen, but eventually set up his own business and which is clearly very successful.
Norman and Pat live a couple of miles from us in Boyatt Wood – just the other side of the M3 from us! Norman was in the Army for many years and then worked for a Japanese bank in London, commuting daily. All four are great fun, so dinner is always a highlight. And we have Ivan looking after us in the Britannia Restaurant. He was our waiter for the second half of the world voyage.
John and Linda Moore are also aboard and we are having lunch with them in the Verandah Restaurant tomorrow.  We were on a table together on Queen Mary 2 four years ago. We were all doing the segment of the World Voyage that took us from Capetown to Rio via St Helena, then Barbados, Fort Lauderdale, New York and home. The Moores are keen golfers and members at Mill Rise.
It was Samuel Cunard’s birthday today and there was the inevitable cake! 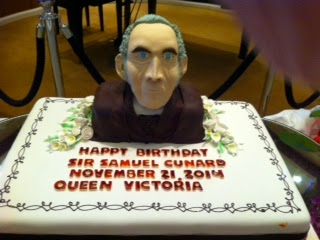