Stewart will be known to many of you. He is the man who collects stamps from around the world featuring Cunard ships. Not only does he acquire them but he assembles them beautifully in albums alongside narrative describing the particular event commemorated by the relevant stamp.

I forget how many albums there are – more than 20 I think, and Stewart has donated many of them to Cunard. In each library on the three Queens there are two of Stewart’s albums displayed in glass cabinets, the librarians instructed to turn the pages each day.

Jane and I first met Stewart and Elizabeth when the four of us (with others) were invited by Captain Paul Wright to dine with him at the Captain’s table on the maiden voyage of Queen Victoria. A very glamorous lady with an American accent was sitting between Stewart and me and eventually I plucked up the courage to ask her how she knew the Captain. He is my husband she replied – and she was!

I have to say that Stewart keeps immaculate records of cruises and events. I have no doubt that if my recollection is inaccurate he will tell me.

Stewart rang me tonight to wish us well on our next trip. He and Elizabeth have just returned from a holiday in Venice, a gift from their family to celebrate their 50th wedding anniversary. The last time he had been to Venice was when he led a party of pupils on a school cruise starting in Venice in 1965. Elizabeth had never been there.

Stewart was, before retiring, Rector of Banchory Academy – a great school.

We have sailed with the Wilsons on many occasions over the years, the last time being the Baltic voyage last year on Queen Elizabeth which returned to Southampton via Kirkwall in the Orkneys and Liverpool where the three Queens met to celebrate the 175 year anniversary of Cunard. 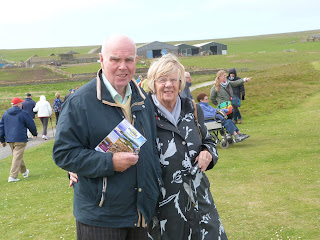 What I forgot to tell Stewart was that next year we have a cruise on Queen Elizabeth booked in the Med in September involving a visit to Venice. There was a major panic here recently when we received a Keep the Date free card from niece Katie and Sam notifying us of their intended marriage near Lucca, Italy on 16 September 2017. Did it clash with the wedding? Yes, the wedding was right in the middle, so that meant a cancellation of the voyage.

Or did it? When I looked at the itinerary I found that Queen Elizabeth was in Messina, Sicily on Thursday 14 September and after two other ports was in Venice on Monday 18 September.

A rapid tour round the internet and a visit to a travel counsellor means we will leave the ship in Messina and take a taxi to Catania airport. Then a flight to Pisa via Rome, collect a rental car and drive to the wedding venue just north of Lucca. Four nights at the wedding venue, taking in all the celebrations and on Monday morning we will drive to Venice and board the ship again. Perfect!