It is more than 12 months since my last blog. I limped off Queen Elizabeth in early October 2015 fearing that I would need a new right knee.

55 years ago, as a result of too much Rugby and Fives, I tore a right knee cartilage. It was removed at Lord Mayor Treloars Hospital in Alton. No one, at the time, explained how the knee would work thereafter, but work it did, and I continued playing rugby and squash well into my thirties, and then tennis into my mid sixties and I am still playing golf.

But by 2015 the game was up! Pushing Jane around the streets of Barcelona and other European cities became a very painful experience.

Back at home,  I tried some Apostherapy, in the hope that surgery could be avoided, but it quickly became clear that it would have to be the knife.

Nick Fiddian, now retired but the top knee surgeon in Poole for years, directed me towards William Tice in Southampton. Within a week I was in the Spire and the proud owner of a Depuy Attune system right knee fitted by Mr Tice. 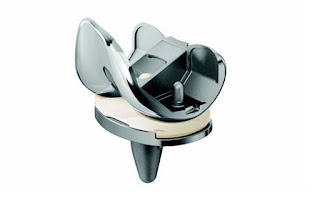 A complicated bit of kit sitting in my knee!

There had to be a fair bit of reorganisation at home with a full time live in carer for 3 weeks and then carers twice a day for some months. Now we have a morning carer for an hour each day, Lucy Austin, who is wonderful. But Lucy has a young family, and we have been lucky to find Kim Bigwood, a recently retired nurse, to help with Jane’s care during our upcoming voyage to the Caribbean.

Soon after my return from three days in the Spire, Jane was rushed into Southampton General where she remained for 18 days, 3 of which were spent in the High Dependancy Unit. She needed intestinal surgery. It was a horrid time for her and it took her a long time to get over it.

To get a wheelchair friendly stateroom, I had to book this trip as soon as it was announced 12 months ago. We have the same cabin we had for the 4 month World Voyage back in 2014, so that’s great.

There are plenty of sea days coming up, and some great ports – La Coruna, Antigua, St Lucia, Barbados, Guadeloupe, St Maarten and finally Ponta Delgarda in the Azores on the way home.

I am also pleased to say that Cunard are offering many more tours ashore on this voyage than usual for guests who are reliant on wheelchairs. I had a meeting with Angus Struthers in January at Carnival House and he listened carefully to what I had to say (about the lack of such tours!)

Linda Croucher will again be house sitting while we are away. She is a star.

We leave Southampton on Queen Victoria on Tuesday 15 November. I will be blogging once we are on our way.