Long ago we visited Corfu three times. We stayed in different places and this time we decided to find a taxi driver who would drive us to Benitses, south of Corfu Town, then across to the west coast and Paleokastritsa and finally to the north coast and Roda.

It took us some time to get from the ship to the centre of town. No one at the ship seemed to know how we would be transported. The shuttle buses did not have ramps. The tour office people could not be found and there had been no communication from them to tell us how we would get to town. We set off to walk but on our way there, a black van with a lift saw us and the driver confirmed that he was employed to take wheelchairs to Corfu town.
In town the taxi rank was nearby and the next available taxi belonged to Leo who turned out to be a gem. Leo is married to an English girl from Romford – Kim Maria Elaine.
Leo was happy to take us on the circular tour we had in mind at an hourly rate.
In 1972, before Jane and I had met, three of us – Brendon Andrews, Ted Coulter and I – had booked a 2 week taverna holiday in Benitses. I think that the cost was £79 each including BEA flights, bed and breakfast! 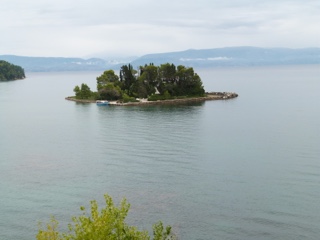 Jane and I met 4 weeks before the 3 of us were due to leave for Corfu. Jane found a one week holiday in a different little hotel in Benitses to coincide with the first week of our holiday. She had to be back in the UK for the start of term at St Mary’s, Wantage where she taught.
So our mission this time was to find Spiros’ taverna in Benitses. Leo remembered that Spiros had set up a disco in the village but that had since closed and Spiros had died. I thought I would remember the taverna, but when we arrived there the village was no longer a small fishing village. Many more buildings and a run down feel about it all. Eventually I realised that the building now called Elios Hotel was the place where we had stayed. 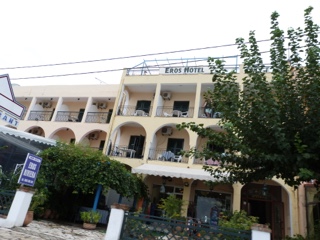 Next we crossed from the east coast to Paleokastritsa in the west. An interesting drive through the hills and then down to what had been a picturesque bay.
Jane and I had stayed there in the mid seventies before the children had arrived. We could remember that the hotel looked like a prison then. We also remembered that we had met two couples from the U.S. who were university lecturers on secondment from Rutgers in New Jersey to Oxford. We met up with one of the couples and stayed with them at their home in the U.S. a year or two later.
As we drove down the hill I saw the hotel behind a closed gate. Leo stopped the car. It was clear that the place was derelict – broken windows, weeds and trees out of control. 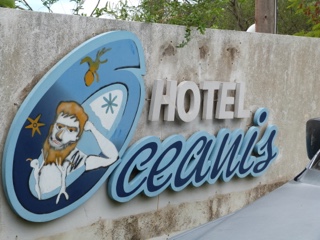 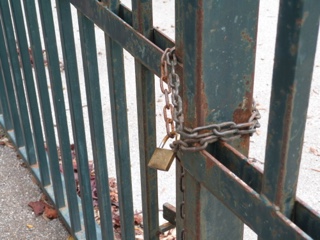 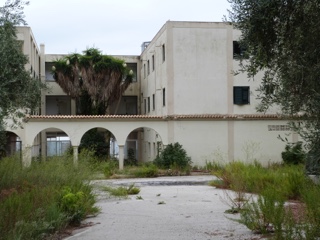 What a great shame.
And the beautiful bay we remembered was tatty and touristy. 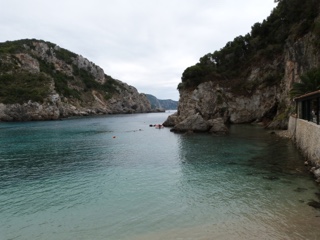 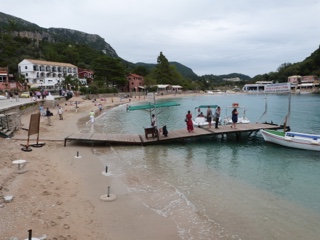 Back in the taxi and off to Roda. What had been an average hotel all those years ago was now a large immaculate place with tennis courts, vast swimming pools and smart accommodation. It was Leo who explained to us why the Roda Beach Hotel was successful, while Benitses and Paleokastritsa were full of closed hotels and failed restaurants. 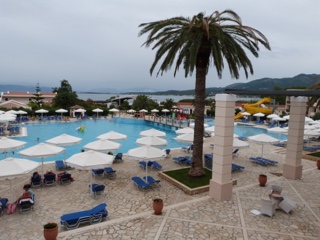 The big problem, which affects him as a taxi driver,  is that the big hotels have made themselves “All inclusive”. That means that the guests pay a fixed amount for their holiday and have no additional costs. Everything at the hotel is included. All meals and all drinks. Not top brands of booze, but as much as you like.
And what happens is that the guests never leave the campus. They eat there and they drink there and at the end of their 7 days they go home. They don’t explore, so they don’t rent a car or use a taxi. The local restaurants suffer and the bars and discos close.

Leo drove us back to the ship by the coast road, round the north and then down through Nissaki to Corfu Town. It was a nostalgic day and revived many happy memories.
Share: