Cunard roll out a number of speakers to keep us entertained during long spells at sea. Some them are described as “Celebrity Speakers”. People like Terry Waite, Martin Bell, Kate Adie, Digby Jones, the late David Frost, John McCarthy, Murray Walker and people of that ilk.

On this part of the voyage a man was introduced as the Celebrity Speaker, although his name rang no bells with me. It was said that he had a football background. Many of you are football fans, so perhaps you can identify him? Email me with your guesses. Generous prize for the first correct answer. 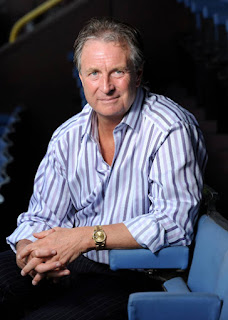 We have settled into the sea day routine and the weather has improved dramatically.

Today the sun has shone all day and temperatures have been in the mid twenties. Bearing in mind that the average age of the passengers must be in the region of 75, the sight of half dressed bodies laid out round the pools is not pretty.

Our dining companions are great fun. Peter is a retired university Prof. His wife Lucinda also worked at the same University and they now carry out research together. They live in Buxton. Roger and Pat come from Mansfield. Roger is retired from what was originally Metalbox and becomes Captain of his golf club on 1 January. John is a great raconteur after a career in plastics. Dinner is always great and a highlight of the day.

I have had problems with the ships internet which is slow. It makes it very difficult to move photos from one device to another – I will use the camera more.

We have moved on to Tuesday. Another beautiful day and lunch alfresco with the Caribbean band entertaining us.

Mike says there is a photo of him in Dubai’s Barasti bar with Richard Bland, Ian Young and the Stoneham crew during or after the Saints recent match with Liverpool. If you have it, please email me a copy.

The draw and clean sheet against Liverpool clearly gave Blandy a lift because he finished his final round one under in Dubai’s DP World tour championship. It was the culmination of a magnificent season in which his winnings have been massive and have moved him to 102 in the World. Watching him in the final group on a number of occasions this season has made us all very proud of him.