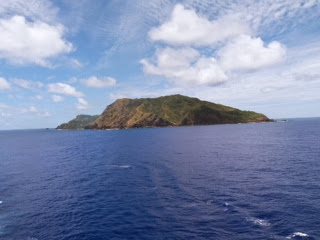 At 0630 as the sun rose above the horizon a small island lay ahead of us. We arrived off Adamstown at about 0800 as planned and shortlly thereafter a metal longboat packed with people was spotted motoring towards us. 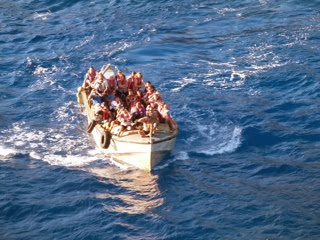 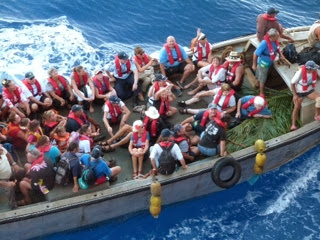 We counted 48 people in the boat and as there are only 56 inhabitants, clearly just about all of them wanted to come aboard QV. The plan was that the islanders would set up stalls in the Queens Room and when they were ready the passengers, armed with US dollars, would be allowed in to buy. At the same time one of the islanders, Jacqui Christian, would give presentations in the Theatre about life on Pitcairn. 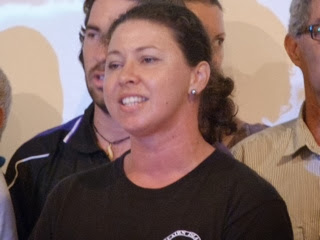 It all worked like clockwork. The presentations by Ms Christian were exceptional. She was educated at Otago University, NZ (Gretchen’s Uni), in Australia and at Cambridge, and spent many years away from Pitcairn before returning and settling there.
She is a seventh generation descendant of Fletcher Christian who, you will recall, led the mutiny on the Bounty in 1789. A little history follows in case you haven’t seen any of the numerous Mutiny on the Bounty films!
The Bounty had left England for Tahiti in December 1787. It was a difficult journey and after 10 months they arrived in Tahiti and for various reasons were there for 5 months. When the time came for them to sail away, many of the crew were reluctant to leave the beautiful girls they had met. They knew the voyage ahead would be hard and within 3 weeks of departing, Fletcher Christian led the mutiny. Captain William Bligh and 18 of his supporters were cast adrift in one of the ship’s boats and the Bounty made her way back to Tahiti.
After a number of attempts to find a remote place where they could settle (and avoid capture and the gallows) Fletcher Christian and 8 of the mutineers plus 6 Tahitian men and 12 Tahitian women and a small girl came across Pitcairn and decided to settle there. The mutineers divided the land amongst themselves, ignoring the Tahitian men who they treated as their slaves. That led to unhappiness and unrest. Christian had not thought through the fact that there were 15 men and only 12 women. And there was a further issue when the partner of one of the mutineers died following a fall and the mutineer then demanded the wife of one of the Tahitian men.
Numerous murders followed and 9 of the 15 men (including Fletcher Christian) were killed in 1793. By 1796 only 4 mutineers and no Tahitian men were left alive. Two of the women had been murdered as well so for a time there were just 4 men and 10 women living on Pitcairn.
The community on Pitcairn survives, but only just. The population is diminishing. In 1936 about 200 people lived on the island. By 1966 it was 100 and now it is just over 50. Children are educated initially on Pitcairn but they spend the last 2 years of High School in NZ and thereafter most of them choose to settle away from the island. 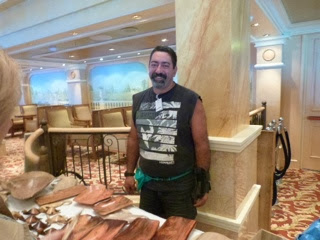 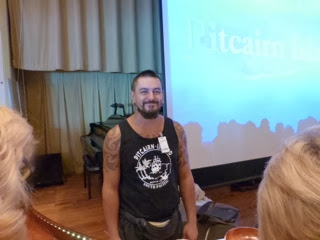 Meeting the islanders and listening to their stories enthralled us all. They had managed to relieve us of fistfulls of dollars and appeared to enjoy doing so! They sold us stamps and tee shirts, caps and carvings, jewellery and honey and every conceivable momento. They even managed to extract US$10 for a Pitcairn stamp on our passports! 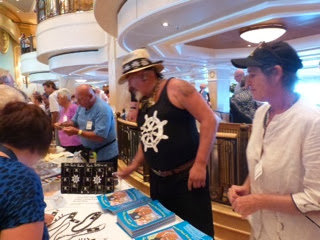 To finish, after rapidly boxing up their unsold thrinkets, they sang beautifully to us all. They then piled back into their longboat and made their way back to the tiny quay tucked into the rocks, which formed the only viable access to the island. 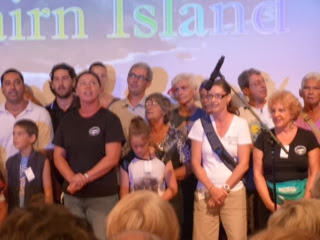 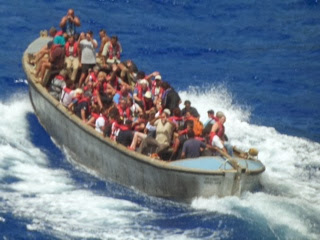 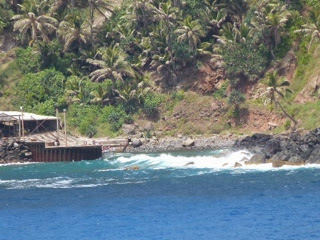 It was a memorable day for us all. As a young boy I had heard all about Pitcairn from my father and it was great to see it and talk to some of the residents. Andrew Christian (nearly everyone was called Christian) told me that the Fletcher Christian who my father had met back in the fifties was his Uncle and had only died at the end of last year.
Share: