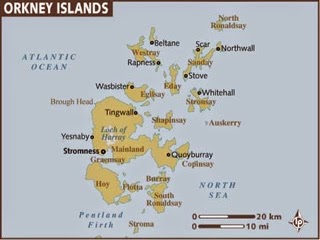 We left it to the Scots to organise the day on the Orkneys. In fact Stewart and Elizabeth Wilson 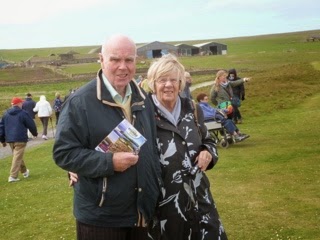 offered to sort out the day with the able assistance of their travel agent son, Jeremy, in Aberdeen. He booked a taxi that would take the four of us and the wheelchair.

Kirkwall is the capital of the Orkneys and we were tied up before 9.00am at what appeared to be a very new berth. The taxi was booked for 10.30am and as we went ashore Stewart said that he had seen the Craigies taxi waiting for us on the quay. But as we came down the gangway the taxi had gone. The presumption was that the driver had picked up the wrong passengers!
But all was resolved within minutes when Billy from Craigies arrived. He had been waiting in town for the appointed hour. Billy was born and bred in the Orkneys. He had worked in the fudge factory for 40 years, had been an auxiliary fireman for 36 years, was a trained carer and a member of Red Cross. He was a brilliant guide. 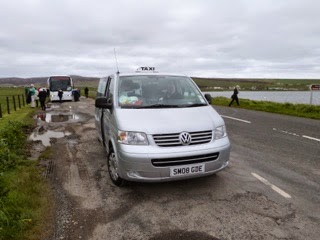 The major problem was that he had a very distinct Orkney variety of Scottish accent. Stewart and Elizabeth understood him, but Jane and I struggled! I was pleased to learn, at our first stop, that Billy was as cantankerous as me. He carefully parked, for Jane’s benefit, at a flat section, so that we could get Jane out and into her wheelchair. It so happened that he had stopped behind 2 large coaches.
The driver of one of the coaches told Billy he was not allowed to park there. That area was reserved for coaches, he said. Billy gave it to him with both barrels and after he had helped get Jane into her chair he was off to tell the authorities what he thought about these coach drivers who had come over from the mainland with their coaches to help with tours from the ship. He was still moaning about them  at the end of our tour.
Billy took us to Stones of Stenness and the Ring of Brodgar thought to have been constructed before 2000 BC. Both are part of the UNESCO Heart of Neolithic Orkney World Heritage Site. 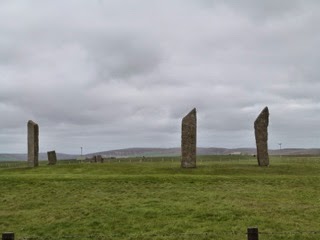 and then on to Skara Brae with its well preserved Stone Age village and a short walk away, Skaill House. 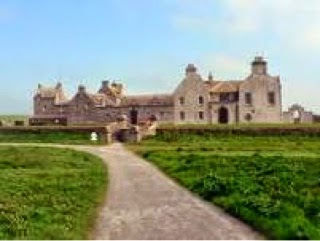 From there we drove across to Stromness. Billy lived there. Very narrow streets, and a wonderful, peaceful place, on the water’s edge. 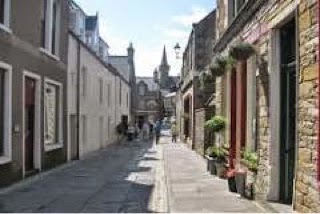 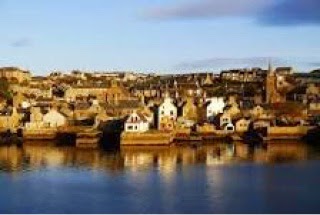 Stromness is well worth a visit. 70 of the town’s buildings are listed buildings, nestled alongside the pretty harbour.
Our visit coincided with a folk festival, and a number of musicians, with guitars slung over their shoulders, were beginning to arrive in the town. But we had to move on.
Next was Scapa Flow and the Churchill Barricades. In both World Wars, Scapa Flow was considered to be a safe anchorage for Royal Navy warships. To the east of Scapa Flow, there were, until World War 2, four channels leading in to the naval anchorage. They were all blocked by sunken ships, and it was considered that attack from the east by sea was impossible. But in October 1939, on an exceptionally high tide, a German U-boat managed to get through and sank the battleship HMS Royal Oak with the loss of more than 800 lives. 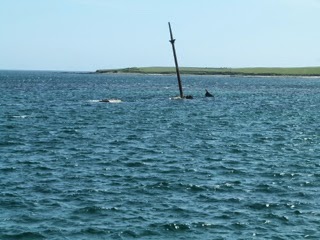 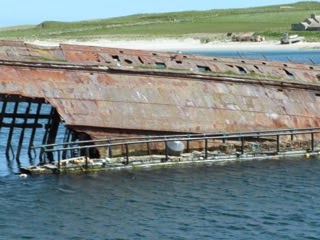 The sunken cargo ships still there. 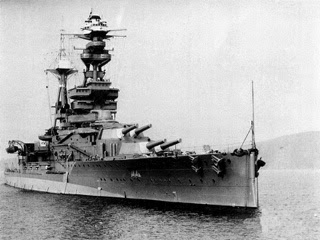 HMS Royal Oak
On learning of this, Churchill ordered the construction of stone and concrete barriers between the islands and those barriers are still there today with roads over the causeways linking the islands together. 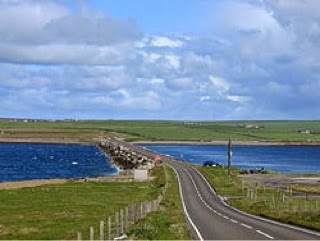 Close to one of the barriers is the Italian Chapel. 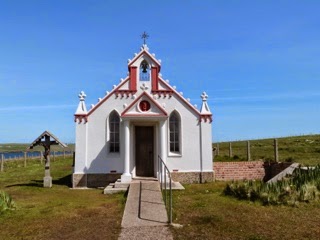 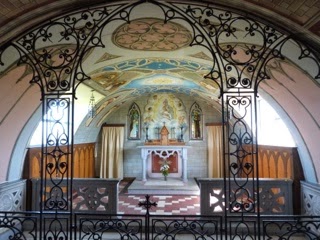 This was built by Italian prisoners of war who had been captured in the North African campaign and sent to Orkney to help with the construction on the Churchill Barriers. It was constructed from two Nissen Huts. The Chapel gradually became a place of pilgrimage for people holidaying in Orkney.
Time was running out. Billy took us to Kirkwall but there was insufficient time for us to explore the Cathedral. He was in trouble with his taxi firm for spending 4 hours with us when they considered that he should have been back to deal with other duties after 3 hours!
We had a great day in Orkney and would recommend Billy and Craigies. Agree an hourly rate beforehand. With 4 of us, less than £10 per hour each was the rate. Very good value with a commentary throughout!
I forgot to mention that early in the tour we stood on cliffs looking towards the island of Hoy and could just spot the Old Man of Hoy. You can just pick it out in the second of these photos. 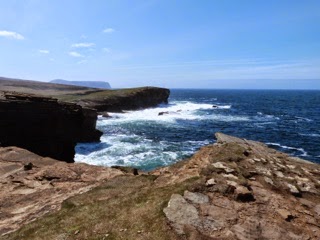 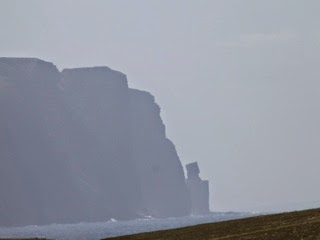