The Tasman Sea was easy on us.  The two days it has taken to reach NZ were calm – in fact apart from the massive storms experienced in the first 5 or 6 days after leaving Southampton, the oceans have been kind to us. 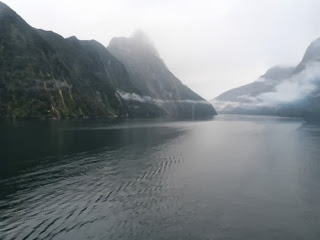 Milford Sound is a fiord on the west coast of New Zealand’s South Island.  It is New Zealand’s most famous tourist attraction.  We arrived at the mouth of the Sound at 0730 and a commentary by one of the Fiordland Rangers commenced on the open decks. 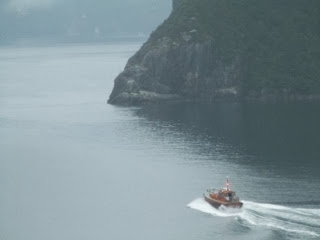 I took up position on Deck 9 in front of the gym.  I used to think of it as my private deck – when the ship was new very few people knew how to access it.  Now everyone knows!  It was cold and visability was not very good.  The fiord is surrounded by sheer rock faces that rise nearly 4000 feet on both sides. 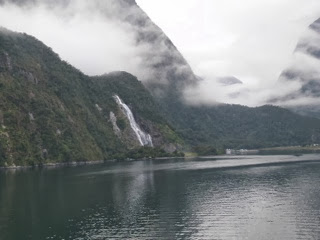 Milford Sound is one of the wettest places in the world but it stayed dry for us. It took us about an hour to travel the length of the Sound. The Captain then spun the ship round twice to give everyone a chance to see the views and we then travelled back to the ocean passing the two permanent waterfalls. There were a number of smaller vessels in the fiord and also a small number of seals. 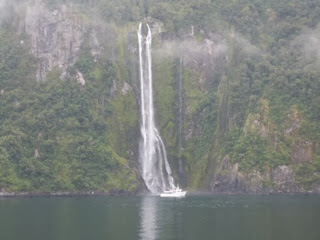 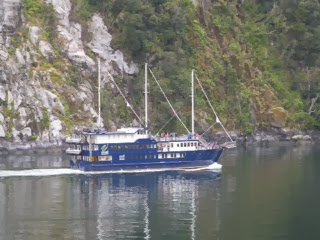 I spotted in The Times today a photo of the Queen Mary 2 Captain. 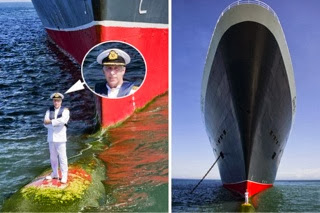 Usually the Commodore of the fleet is in command of the flagship, but in fact the Commodore is here with us. I gather that when he took up the position he made it clear that he wanted to move around the fleet, rather than staying on QM2 throughout.  He joined us in Sydney and has a few days aboard familiarising himself with the ship’s systems before he takes over from Captain Inger, who goes on leave in Wellington.

We now have a very busy week. We have 6 ports in 6 days, so I may struggle with the blog!
Dunedin tomorrow, Wellington on Monday and then on Tuesday we are in Napier where we will meet up with Maryjane Watson who is Mike’s girlfriend Gretchen’s Mum.
She is taking us to see the new house she is having built outside Napier.  We had then hoped to have a long lunch together but sadly the ships schedule is such that we have to be back on board by 1300 – so it will have to be a short brunch.
Mike with Gretchen in Dubai. 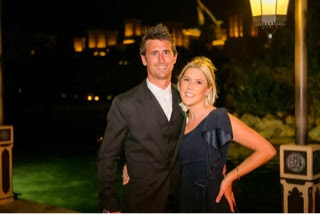 On Wednesday we are in Tauranga, Thursday is Auckland and Friday the Bay of Islands. Hard work this cruising!
Share: