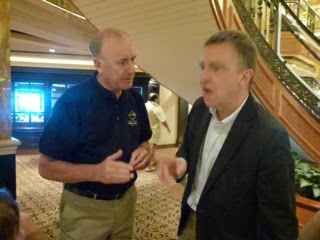 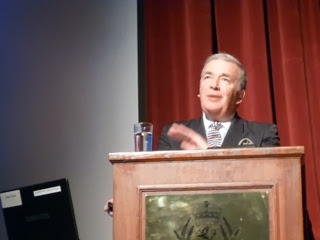 Cunard have been producing a number of speakers on each segment and one of them is said to be the Celebrity speaker – John McCarthy, Admiral Lord West and Peter Snow so far and for this leg Roger McGuinn. I will report on him later as he has yet to speak. He was one of the founder members of The Byrds.  I have heard him before on QE and am looking forward to hearing him again, hopefully with fresh presentations! 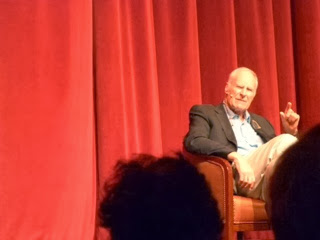 Peter Snow was brilliant. He based many of his talks around famous battles. He and his son Dan have written books and made TV programmes on their pick of the best battles and battlefields and he told the stories enthusiastically and without a note.  He also talked about his incredibly interesting career in broadcasting.
His wife Ann MacMillan has been a well known Canadian broadcaster based in London for some 35+ years.  Peter said the she used to be known as Peter Snow’s wife, but is now known as Dan Snow’s mother. A Canadian in the audience shouted out that Peter Snow was known to Canadians as Ann MacMillan’s husband! 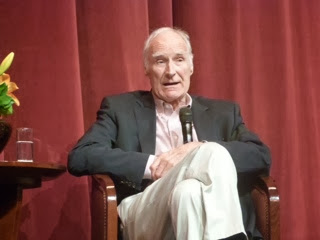 I well remember the evenings when Peter Snow used to be involved in the General Election broadcasts for the BBC with his swingometer. Carole and Ian Gordon used to host what usually turned out to be a boozy evening around the TV watching the results come in.  On one occasion Peter Snow appeared with trousers that were too short and wearing strange brown suede shoes. One of us, who shall be nameless, telephoned the BBC asking if something could be done about it! Nothing was.
The singers and dancers appear in a variety of excellent shows during each segment. In the past they have usually been made up of East European dancers, but 10 days ago they were interviewed on stage. All but one of the dancers are Brits and of the four singers, one is Irish, one Scottish, one American and one Canadian. 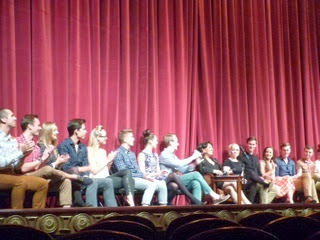 On Shrove Tuesday there was a pancake race with the singers and dancers and all the other departments taking part. It was somewhat less risky for them than the tug of war competition that they entered earlier in the voyage. 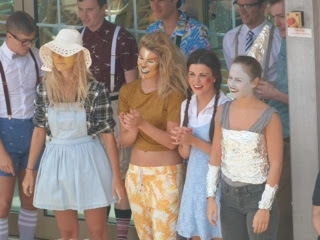 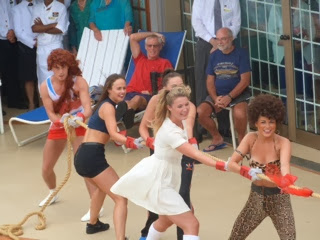 The Bridge team also entered the tug of war, led by the Deputy Captain (at the front – leading by example!).  The chap in the white tee shirt is the Captain’s husband. He told me later that his arms were covered in bruises and rope burns afterwards.  When he agreed to take part he had not appreciated how seriously some of the departments treated the event! 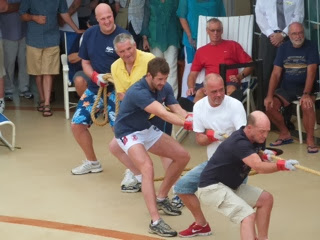 I have just bumped into Carol Marlow.  She was President and CEO of Cunard until about 5 years ago when she moved to the same position with P&O.  She left that job in September at the same as Peter Shanks, who had succeeded her at Cunard, left for pastures new. Carol is on QV for 2 weeks until Auckland as a passenger. I knew her well in the days when Cunard’s offices were across the road from our office. 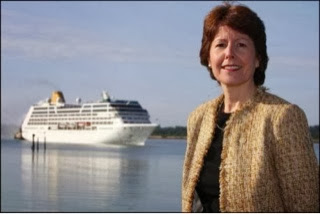