Maori settled around the large natural harbour in this part of South Island, New Zealand (the Otago region) from about 1100 AD, but it appears that when Captain James Cook came here in 1776 there were not many Maori still here.  In 1848 Scottish migrants arrived and established Dunedin (the Celtic name for Edinburgh).  It is New Zealand’s oldest city and it is home to NZ’s first University, The University of Otago.

Robbie Burns large statue sits above the Octagon, at Dunedin’s centre, and the reminders of that Scottish heritage can be seen throughout the City. 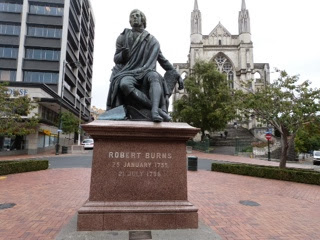 We docked on Sunday at Port Chalmers about 8 miles out of Dunedin. The shuttle bus had a ramp and we were soon on our way into the city at enormous speed, around the fringes of the harbour.
We imagined that everything would be closed, but that was not the case. John and Peter Stafford, the twins from Sandbanks, Dorset made their way to the Cathedral, found it was Commonwealth Day, enjoyed the last 30 minutes of the service and then were entertained to coffee and cakes by the great and the good of Dunedin.  No doubt they made a generous donation to the collection! 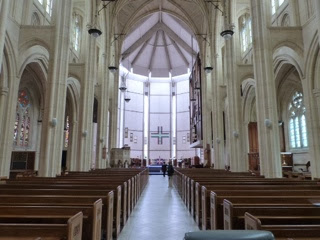 We explored the city, heading initially to the old railway station. It has been restored to its former glory and on the top floor is The NZ Sports Hall of Fame. Great fun with many familiar names from the past – Bob Charles, Sean Fitzpatrick and Richard Hadlee and many more! Yes honest. 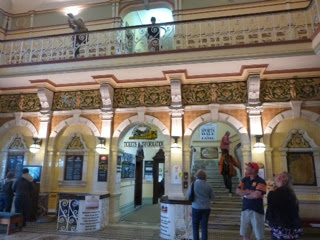 We did not get to see the University and we know that Gretchen will give us a hard time about that, but we ran out of time after seeing the Cathedral and the elegant buildings in the centre of the City. 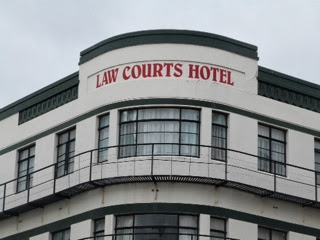 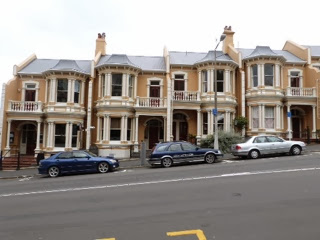 Dunedin was cold.  It is many weeks since we had been that far south, but our schedule now takes us north again and our next port is Wellington.
Share: