When Queen Victoria was being built in 2006/7, Cunard let it be known that they intended to set up an exhibition on the ship displaying memorabilia from the earlier Queens – the Queen Mary, the Queen Elizabeth and the QE2.

They asked for exhibits. I had built up a small collection and emailed them to let them know what I had. Cunard’s Southampton office was just across the road from my office at Paris Smith and Randall
and Peter Shanks, who I think was head of European sales at the time, asked if he could see them. We met and he liked, in particular, a log book from the Queen Mary.
The logbook was the hand written original covering Queen Mary’s first voyage from John Brown’s shipyard on the Clyde to Southampton and then the first six transatlantic voyages. It mentioned the visit to the ship of King George V and later on the same day the visit of Queen Mary, after whom the ship was, of course, named. 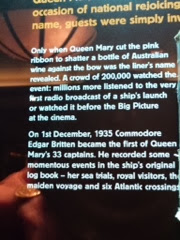 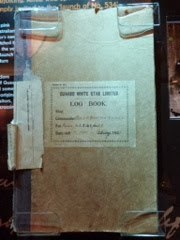 You may know the story of the naming of the new ship. Until then Cunarders had names ending in -ia – Britannia, Scythia and so on. The Cunard Board thought that Victoria would be a suitable name for the new ship and the Chaiman met with the King (some say on a golf course and others put the meeting at the Palace.
The Chaiman said that the company wanted to name the ship after the greatest Queen the nation had ever known, to which the King replied that he was sure that his wife, Queen Mary, would be honoured to have the ship named after her. So Queen Mary it was. 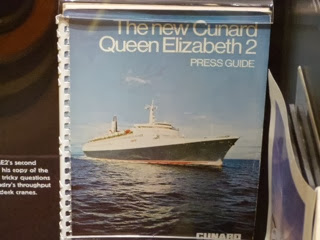 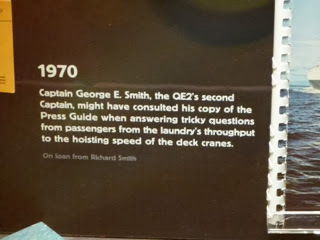 The memorabilia project was being run by an outside agency and they met me and earmarked 6 items which they wanted me to lend them for the display which they called Cunardia. A formal loan agreement was drawn up under which I agreed to lend the items for 10 years. 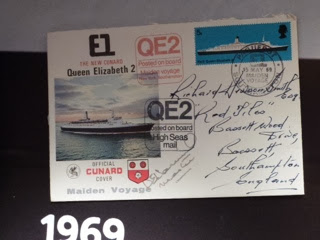 Jane and I sailed on Queen Victoria’s maiden voyage in December 2007 and saw Cunardia for the first time. We were pleased to see my memorabilia together with many other items in the display cabinets. Six years on they are still there.
Share: