Fiji’s welcome was loud and dramatic.  At 0700 as we neared the quay we woke to the sound of a marching band.  They marched and they danced.  They rarely flagged but when they did take a break, a rock group, half hidden in the shed, played electric guitars at full volume. 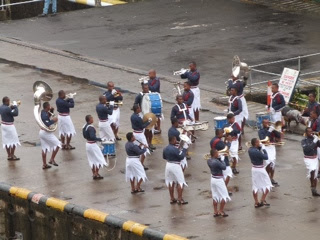 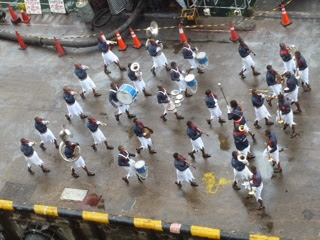 I guess they hid in the shed because they knew it would rain.  And it did for most of the day which was a shame. We ventured out and headed for the capital, Suva. The pavements were not great for wheelchairs but we took refuge from the rain in a modern department store and at the top were food outlets and WiFi. 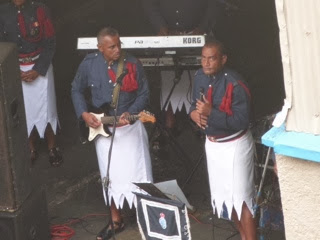 After catching up on emails I noticed two young lads in tracksuits, one of which had “Canford” on the back. They had left my old school last summer and were in a gap year teaching at a primary school in Fiji.  They were somewhat surprised to meet up with an old Old Canfordian in the middle of Suva!
After Jane’s inevitable visit to the many markets and market stalls (all selling identical black pearls and the usual Polynesian tat) we found a taxi man who spoke a little English and for a fee was prepared to drive us further afield.  It continued to rain, and it transpired that the drivers English was as poor as my French, but we managed.
When we arrived at the President’s residence, our driver was very keen on me helping to guard the place. He made me wait for the sentry to stop marching and when the man was at ease, I was to stand alongside. But don’t try to talk to him, he said. 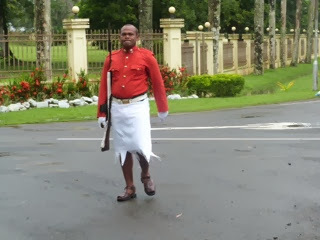 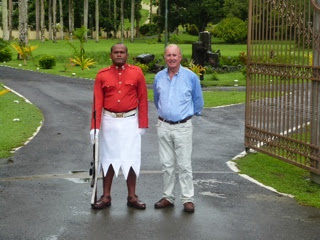 We then had 685 nautical miles to travel to our next port – Noumea in New Caledonia. Little was known of this group of islands until Captain James Cook landed there in 1774. The mountains reminded him of the Scottish Highlands, and hence the name.
Our berth at Noumea was in the commercial port, but despite that we were greeted by a group of Polynesian dancers who performed to an unattractive backdrop of massive containers. No walking is allowed in these container ports and as the shuttle buses were not wheelchair friendly, a man with a van and a ramp was provided to get us to the terminal building. 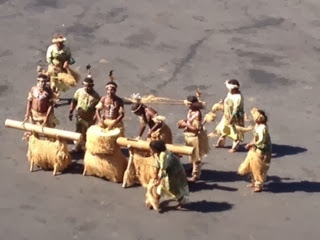 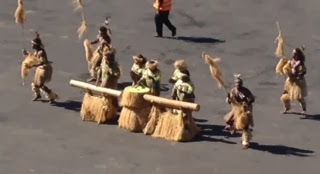 Noumea was a revelation. It was a beautiful day and we set off round the harbour, packed with a large number of expensive vessels. After a small beer we found the inevitable market but as we ventured into the town it was clear that this place was quite different to the other Polynesian islands. It was clean and tidy. The wheelchair access was excellent with dropped kerbs and ramps into shops. All very French although the grid layout showed an American influence. They used the islands as a base in WWII.
It was hot, so we returned to the ship for a rest and lunch and then set off again. The local staff (pretty, young ladies) responsible for transport in the port said that the man, Thierry, and his van were under employed and arranged for him to take us to the botanical gardens and zoological park which Jane wanted to visit. 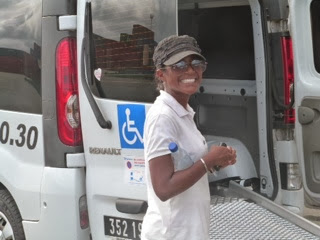 He dropped us off at the entrance which was at the top of a hill. Thierry would return in an hour. In fact that gave us more than enough time because the park consisted of dozens of very steep paths. Not only difficult to get down but impossible to get back up with a standard wheelchair pushed by me. We managed to see a few goats and peacocks and that was about it! 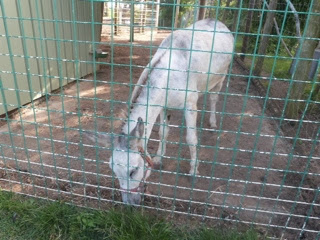 Thierry arrived back on time with another couple from the ship. They had been to a beautiful beach at the Bay des Citrons but could not find a taxi to return them to the ship.  Thierry had come to their aid. Louis was in a wheelchair and his companion was Sara – both from Ponta Delgardo in the Azores.  That was the port we missed at the beginning of our voyage because of the gales. They had anticipated that the ship might not be able to get into the Azores and had flown to England to start the voyage in Southampton.
As we arrived back at the ship another group of dancers started to dance in front of us. Tomorrow we will be exactly halfway and on Monday we arrive in Brisbane. 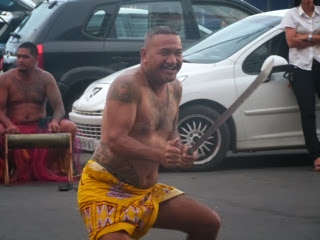 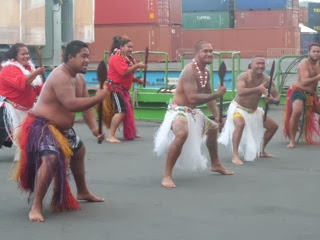