Skip to content
In the days prior to the call at Lisbon, the tour office on the ship had been selling hop on hop off bus tickets. The advertising said that the buses were wheelchair friendly. As we had not toured Lisbon for years we bought tickets.
Lisbon can be a great place –  but not when it’s raining. It was pouring when I awoke. I looked out to see that we were passing under the 25 de Abril Bridge, but the visibility was poor. 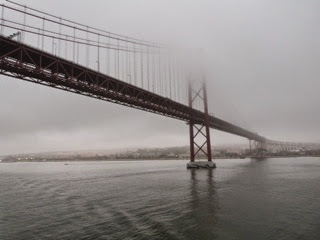 The bridge was built by the American Bridge Company who also built the San Francisco – Oakland Bridge (not the Golden Gate Bridge). I happen to know this because some years ago, after a visit to Lisbon, I saw a photo of the bridge in an online competion and was the only one to correctly identify it. The prize? A Cruise Critic cap!

In the past we have always tied up near the bridge, but this time we kept going and moored much closer to the city centre.

Very few people were venturing out, but the stupid Smiths did, with raincoats and umbrella. The driver of the wheelchair friendly shuttle bus kept us waiting for 40 minutes but we eventually arrived in the middle of Lisbon. It was still raining heavily. All we had to do now was to find the bus stop for our red bus.
We were in a large square but eventually found the bus stop. When the red bus showed up, people emerged from the shadows and climbed aboard. When we found ourselves by the door, I asked the driver if he could get the ramp out, so that I could get Jane aboard. Despite having an area marked out for wheelchair users, there was no ramp to get them aboard!
I realise that I have become particularly cantankerous over the last year or two. Always complaining! When I complained about the lack of facilities, the driver said he would take us to his supervisor at the next stop. He helped me lift Mrs Smith and the chair on to the bus. At Stop No 1 he took me to the relevant chap who ranks at the top of the 2014 list of rude men.
When I explained the fact that it was somewhat difficult for Jane to hop on and off without a ramp, he told me that I could find the address to which I could write on the company website. He then resumed the conversation that he had been having on his mobile. A lady employee told me that the drivers had all been complaining about the lack of ramps to their superiors, but that nothing had been done about it. That wasn’t much help to us, I explained.

So we gave up and returned to the ship to find that most people had stayed on board all day! I must get round to looking at that website and joining all those online complainers!
Pat has sent me a picture of Table 314. 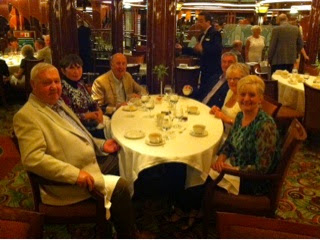