We have just crossed the Equator again.  But there is a big dilemma and dispute aboard QV.  It is about water.  Not the water in the ocean.  That is now calm and the effects of another Cyclone (called Mike) have disappeared.  As you will know the Pacific is the largest of the world’s oceans so there is no shortage of the stuff there. 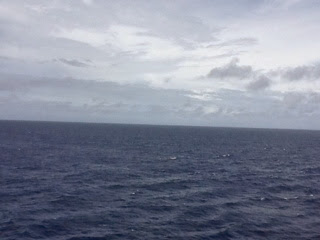 It is the water on the ship!  I don’t mean that there is any sort of problem with the quality of the water. We have all sorts of water here.  Some is in bottles and sold to us at $3.95 (and many buy cheaper versions ashore and secrete them about their person when coming back on board). 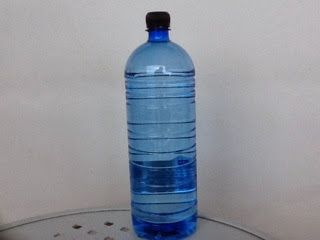 A nuclear physicist on board (in the Churchill Lounge where people smoke and gossip) told Jim Burnett, one of our dinnenr tablemates, that the water goes down the plughole in the opposite direction once you cross the Equator.
No one was sure which way it went before and after crossing but Jim insisted it was true that the direction changed.  He is a Scot and knows these things!  And he and his wife Liz have a second home in NZ and he says he has checked it many times.
I thought it was an old wives tale so decided to experiment.  Last night in the southern hemisphere the water went down clockwise. It was difficult to tell to start with but when I floated small bits of paper in the water it became obvious. This morning my scientific research continued.  In the northern hemisphere (using the same sophisticated system) the water went down ………………………………………………clockwise.
I tried again, after the Commodore had confimed that we had indeed crossed the Equator, and the result was the same – clockwise. 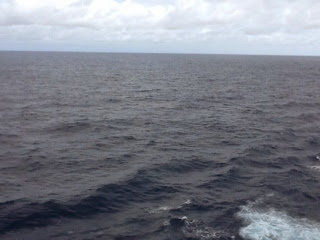 It may be that in our particular case the results have been skewed (is that a word?) by the fact that the Equinox occurred today.  So we crossed the Equator as the sun was at its highest point.  Do you think those people in Southampton at Cunard’s HQ who fix the itineraries worked that out when sorting out ports and the timing?  Clever if they did.
Here is the sun overhead. 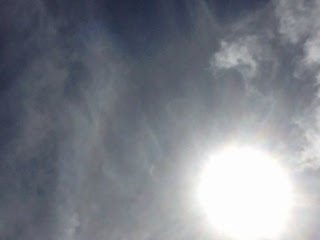 We are at a party with the Commodore this evening before dinner, so I will find out what he thinks about our plughole and the Equinox, before I see Jim at dinner.  The problem is that the Commodore is a Kiwi and he may side with Jim.  By the way Jim is bit good at golf – plays off 7 – has been down to 3 – so I try to avoid discussions about golf!
If any of you know the answer to my water problem, please let me know! I avoid Google on the ship because the systems are so slow that it takes a lifetime and many dollars to get anywhere.
Share: