Before I tell you about Auckland I need to organise my photos but for those of you following our progress by satellite I have to report a change of plan.

Cyclone Lusi has been an issue for a couple of days. The Commodore of the Cunard fleet took over command of the QV in Wellington when lady Captain Inger went on leave and the Commodore has done a great job in keeping us up to date with the weather conditions.
Tropical Cyclone Lusi has been on track to hit NZ this weekend.  We were in Auckland yesterday, Friday, and were due in the Bay of Islands today.  The ship was to be at anchor for the visit, which meant that if the storm hit us while some people were ashore, there would be chaos.  There would also have been safety issues for people in the tenders and for the ship herself.
Additionally it was the case that if the Cyclone did not reach the port while we were there, after we had left we would then find ourselves in the eye of the storm.
When we arrived back in our cabin after our day in Auckland, a letter awaited us confirming that we would not be going to the Bay of Islands.  We would set sail on time and travel as quickly as possible on a NE track, in the hope that we could avoid the worst of the storm, before altering course towards our next port, Nukualofa, Tonga.
We have never been to the Bay of Islands, so it is a pity that we are missing it, but as it is an anchor port, Jane would not have been able to get ashore.  She would have enjoyed the almost empty ship though, and that would have meant that she could play with the communal jig saws without others interfering!
Decisions about missing ports are clearly not easy ones, especially when the place is particularly beautiful, but the Commodore dealt with this issue very well. It will be very difficult for anyone to criticise his decision. 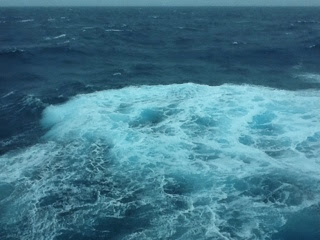 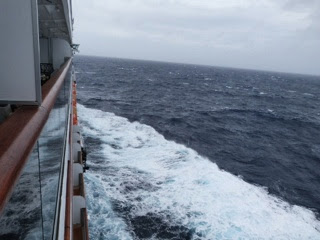 So today has become a ‘sea’ day and the ship is beginning to move about. The wind is at Force 7 and the waves are at 5/7 metres and expected to increase in height. The next 24 hours should be interesting! 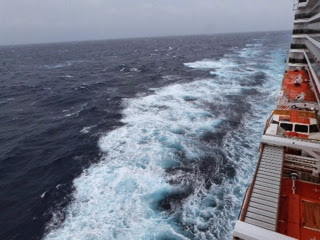 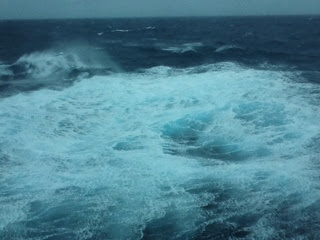