What an amazing place. Cartagena is far enough away from cities like Alicante to the north and Malaga to the southwest to be largely ignored by tourists (well British tourists).

It has a wonderful harbour. Hannibal made his base here in 219 BC before leaving to cross the Alps into Italy with his army. Because of its strategic position and easily defended harbour, the city flourished under the Carthaginians and under the Romans.
Later, the city came under the influence of the Moors and then became a principality of Spain. King Philip II created a major port, but a century later the English occupied the city and then in 1723 the French ruled the area. In the latter part of the 17th century Cartagena declared itself independant but that was shortlived.
During the Spanish Civil War the region did not support Franco and was one of the last cities to fall into Franco’s hands.
What is astounding about the place is that in the 1980’s, when the city authorities decided to clear the whorehouses and bordellos, they knocked down the brothels and the other buildings in the area. And underneath they found Roman remains galore. 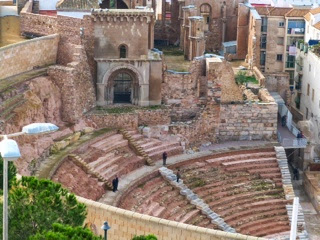 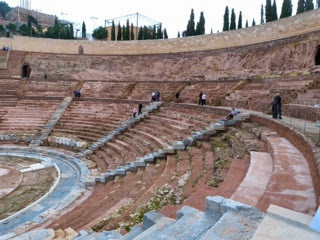 They found a massive theatre which archeologists have been working on and restoring. It is unbelievable that something so large could have been forgotten about. They also discovered the Forum and the Roman Baths which have been restored. There are numerous fine buildings to explore and the main street has been beautifully pedestrianised. 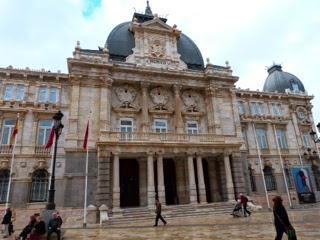 The QV’s berth was alongside a very busy marina. Southampton could learn from the way in which the waterfront has been laid out, because the cafes, the restaurants and the sea museums overlook the marina and the cruise ships.
As we located a table in the sun Tim and Jean Whitehead arrived and joined us for a well deserved and very strong coffee. 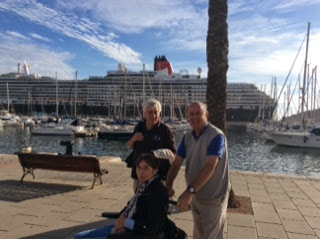 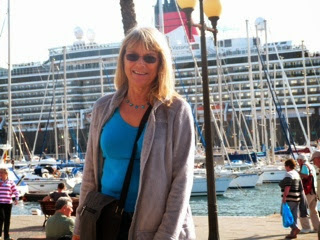 We suggest that if you haven’t been to Cartagena you make the trip. More and more of the Roman buildings are being recovered and restored and there is plenty to see.
Share: