We received an invitation to sit at the Captain’s table last night. The Deputy Captain Simon Love was the host. Jane sat next to him and he was in excellent form. We knew that he had gone to sea as a young man, had gained his Masters ticket, but after marrying had left the sea. And after 17 years ashore he had returned, working initially for P&O and then for Cunard.

Over the years I have met many men who left the sea when they married but I had never heard of anyone returning after such a long gap. Apparently he had worked for the family business while ashore and some 8 years ago his elderly father (who had been a P&O Captain himself) decided to take all his family on a cruise. They were on the Aurora and by chance the Captain was a man who Simon had worked with in his early years at sea. He told Simon that Carnival were trying to encourage people like him to return to sea. As his children were growing up and as his wife and children could accompany him from time to time, he took the plunge, requalified, started with P&O and has now moved to Cunard. 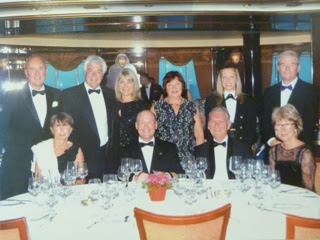 I have no doubt that it will not be long before he has his own command.
Sitting to my right at dinner were a couple, Tim and Jean (who are to the right of me in the photo). It was quickly established that Jean grew up in Southampton, went to the Girls Grammar School in Hill Lane, played lacrosse with Jane in the Southampton Ladies Lacrosse Club that Jane ran for many years and, like Jane, had been a teacher.
There were other coincidences. Tim had been at Southampton University a few years after me. He went into Tourism and was Head of Tourism at Poole and then Director of Tourism at Torbay. While working in Poole they lived in Merley, less than a mile from my school Canford!
It was an excellent evening.
Share: