As many of you will know my father, George Smith, was a Cunard man. Born in Grimsby, Lincolnshire in 1914, he went to sea when he was 15. He studied at the Grimsby Nautical College and joined the New Zealand Shipping Company as a cadet. He had been round the world 7 times before he was 21. 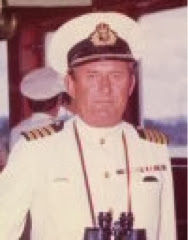 After the cadetship he joined the United Baltic Shipping Company and eventually Cunard White Star Line as it was then called. During World War II he served on both the Queen Mary and the Queen Elizabeth and after the war he was assigned to the Queens, which resulted in my parents moving in 1946 to Southampton, where my sister Elizabeth and I grew up.
In those days wives of serving officers were not allowed to travel with their husbands which meant that my father was away from my mother and the family for long periods. While on the Queens it was not so bad for my parents as the transatlantic runs meant that my father would be home for 2 days every 2 weeks while the ship turned round in Southampton. 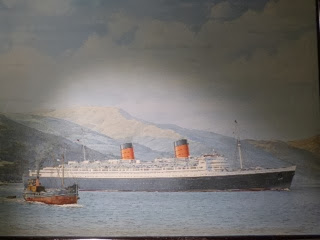 My father also served on the Sythia, Media, Parthia, Mauretania, Caronia, Saxonia (later renamed Carmania), Ivernia (later the Franconia), Carinthia and Sylvania. It was the Caronia that I remember really well because my father loved that ship, but it did take him away from us for long periods of time. I am talking about the Caronia that was affectionally known as the Green Goddess (in service between about 1949 and 1965) and not the Caronia of later years (which was the renamed Vistafjord). There is a model and display about the old Caronia in the Chart Room on QV. 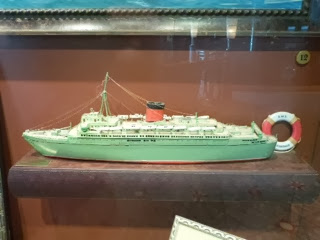 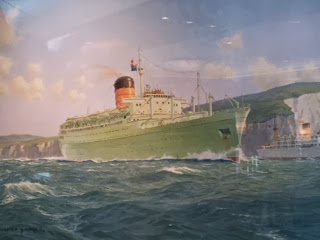 What I remember well was his return after he had been away for 6 months on the Caronia, initially on cruises out of the US to the Caribbean followed by a World Cruise again out of the US. I guess that I was 8 or 9. Of course it was good to see my father again after all that time, but it was the large additional suitcase that he brought back that was more exciting. He had bought and been given momentos of the various magical places he had been to around the world and it took us 2 days to open all the gifts while listening to the stories about the places where he had acquired them.
The point I was intending to make was that one item he brought back for me was an envelope bearing a Pitcairn Island stamp, duly franked and signed by Fletcher Christian, a descendant of the original mutineer of that name, and at that time the Chief Magistrate on the island.
We are due to sail by Pitcairn on Sunday 16 February. We understand that some, if not all, of the 50 residents of the island will come aboard QV that day and will set up stalls in the Queens Room. We will not be able to go ashore. The island could not cope with so many people.
What I have not told you is that a few years after being given the Pitcairn stamp I stupidly swapped it with another boy for what I mistakenly thought was something better. But I did keep Fletcher Christian’s signature.
I think my father was a Chief Officer at that stage. He went on to become the penultimate Captain of the old Queen Elizabeth and the second ever Captain of QE2. His last ship before retirement was the Franconia which ran between New York and Bermuda on a weeky basis. 36 hours at sea from NY to Bermuda and then 3 days tied up on Front Street, Hamilton and then 36 hours back to NY and a day to turn round. 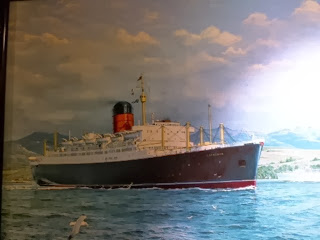 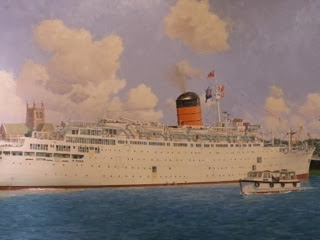