The voyage to the berth through the heart of Venice was magical. For some years there has been talk of large ships being banned from the lagoon because of the damage some believe they cause to the buildings. Luckily for us that ban has not yet happened, but is is clear that subsidence is taking place at a rapid rate. There is plenty of restoration work taking place and a new tidal barrier has been built, but it is doubtful that that is enough. 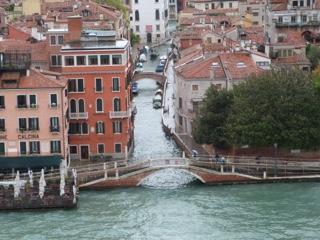 If you have not been to Venice by sea, we can recommend it. Try it for yourselves.
The weather improved by the time we made our way to the Tronchetto Waterbus. 3 Euros in total for the two of us for the 40 minute journey down the Grand Canal and back again at the end of the day. What value! We had been offered something almost identical for 125 Euros each on the ship. 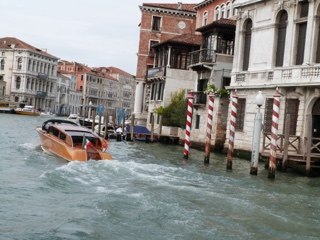 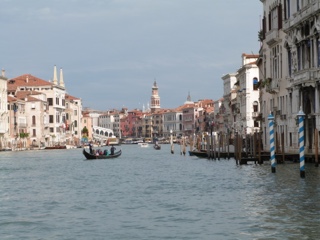 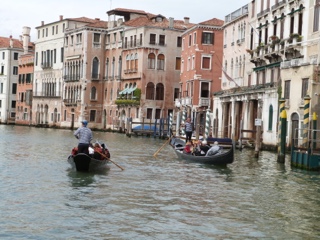 Much of the advertising material said that the bridges in Venice couldn’t be crossed by wheelchairs. Wrong! We could see from the ship that many had ramps across them. We also found that a number of them had infills down one side to enable wheelchairs to cross. We were very pleased to find how easy it was for us. 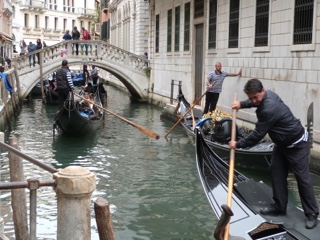 The vaporetto quickly became packed with tourists, but we had found a comfortable corner and access to an open window for the camera. One other couple from the ship had a wheelchair and were clearly nervous about the trip on the vaporetto. They watched our every move, so that each time I stood to take a photo, they stood too and readied themselves to leave. When we disembarked at St Mark’s Square, they followed. They seemed overawed by the crowds and quickly made up their minds to return to the ship and safety. They missed a great day. 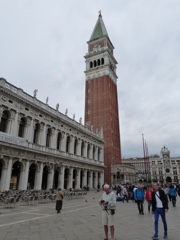 We decided to start with one of the most expensive coffees in the world. In a wonderful position in the square, people watching. 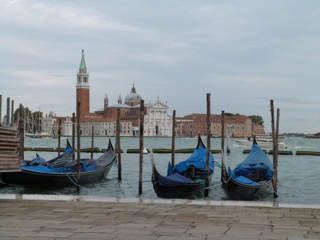 We then started down one of the side streets off the square, and realised that we had never explored the streets and alleyways before. We went north initially, and often had to do 180 degree turns when an alleyway turned into a flight of stairs. We made great progress and covered miles, eventually turning south again and finding the canal where the gondoliers load up new passengers. There was no shortage of takers. 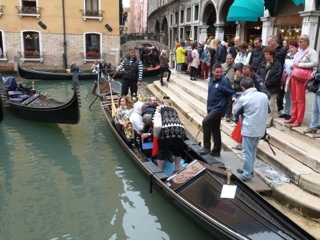 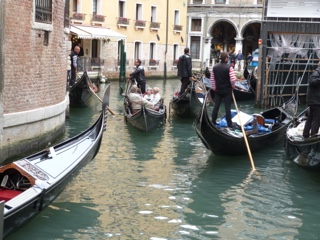 The dreaded knee has been holding up quite well, with the assistance of doses of ibroprofen. I had thought that Venice might be a difficult day, but it was not. The streets are so well trodden that the cobbles have been flattened and the surfaces are smooth.
Eventually it was time to return to the ship, and the vaporetto ride back down the Grand Canal was just as exciting as the morning trip. We also managed to collect and guide another couple, who had no idea about how to get back to the ship from St Mark’s! 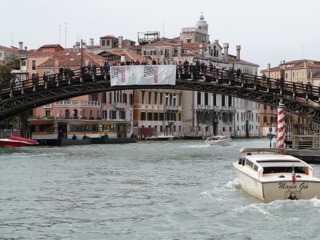 Earlier in the day, while we were near St Mark’s Square, we had seen one of the Holland America ships taking exactly the same route that we had earlier. The Niewe Amsterdam is the same hull shape as QE and QV. 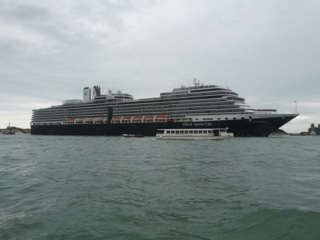 We left the berth at about 18.45 and retraced our steps down towards the lagoon, passing some of the mega yachts moored near St Mark’s. It was a great spectacle. 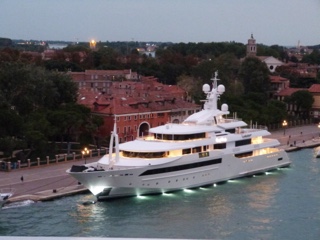 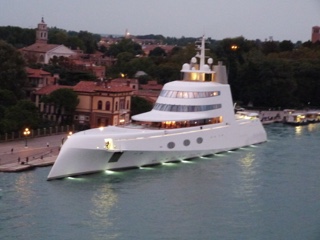 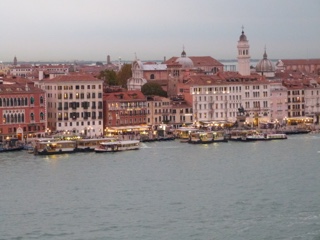 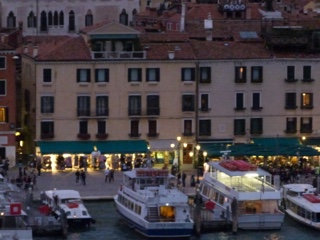