OThey said there were cobblestones everywhere. That was four years ago and we did not explore Tallinn as comprehensively as we might have done.

This time we decided to make more of an effort. The plan was to take the shuttle bus which would drop us off in the centre and then we would either take a cab to the old town at the top of the steep hill or we would push up the hill, depending on the state of the cobbles!
We don’t take the electric wheelchair ashore usually, because of the problems with high kerbs, but also because buses and cabs with hoists or ramps are rarely available. So it is the folding wheelchair and no power!
It was a lovely day. Sunny but cold. Jane was wrapped up well. 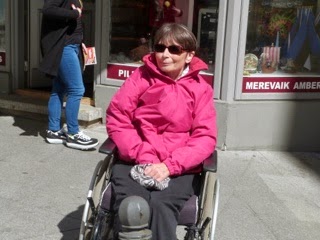 The shuttle with a ramp soon arrived. There was very little Sunday morning traffic and we were soon at the Lower Town.
It was between the 13th and 15th centuries, during Danish rule, that Talłinn was a renowned international and mercantile centre – a major member of the Hanseatic League. The merchants based themselves in the Lower Town. The Upper Town developed separately, ruled by German aristocrats. 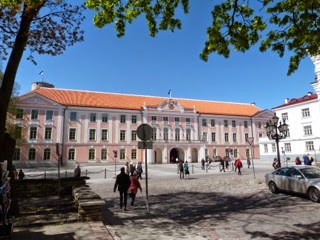 We began to wend our way through the narrow cobbled streets, and found that comparatively easy, as pavements could usually be found on one side of the street and the hill was fairly gentle. We came across the Town Hall Square, which was lined with cafes and we settled down to excellent coffees before starting the more arduous climb to the Upper Town centered on Toompea Hill.
Again there was a flattish pavement and the steep part was probably no more than 100 meters long. Suddenly we were there and the Castle and Pikk Hermann Tower were magnificent. 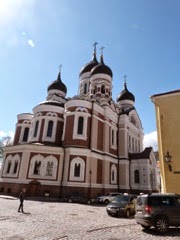 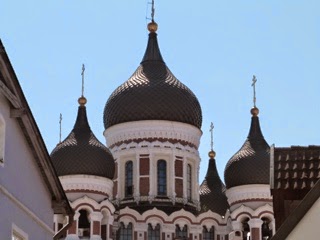 Tallinn is sensational. The atmosphere in the Old Town was exciting and if you have not been here it is a must.
Next is St Petersburg for 2 days. We are looking forward to that. 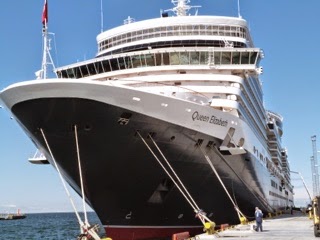