Jane and I were last in St Lucia in 1981. I had found a deal at the Halcyon Beach Club, just north of Castries – 3 weeks for the price of 2 and children free. We only had Louise at that time, and we all had a fantastic holiday. Great food and drink and unlimited waterskiing and sailing. The  hotel is now owned by the Sandals group and is known as Sandals Halcyon.

Queen Victoria arrived in Castries on time and was berthed and secured by 7.00am. She was followed in by P&O’ s Britannia and then by Fred Olsen’s Balmoral.

Cunard have arranged a number of wheelchair friendly tours for this voyage and we took advantage of their tour of the north west coast which left the ship at 8.30am. Bruno was the driver and Mitch was the guide. Here’s Mitch – a very bright young man with an amazing vocabulary. 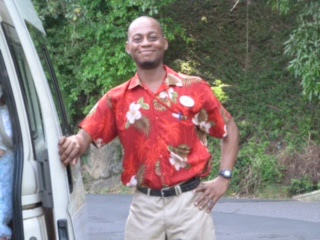 The plan was to drive south from Castries to Anse La Raye, a small fishing village. It was not much of a place. Most of the men were sitting in the Main Street doing very little. Possibly that was because it was a Saturday, possibly not. Most of the fishing boats on the beach were in poor condition and the nets were strewn about and in disarray.

Inevitably the women were  working. On a street parallel to the one where the men were lolling about, the women had stalls selling the usual tourist ‘tat’. Sadly they didn’t appear to be having much success in selling to the numerous small tourist wagons that arrived while we were there.

Next we turned north again and stopped for refreshments (compulsory rum punches) looking down on Marigot Bay. A beautiful bay regularly used in Hollywood movie scenes. 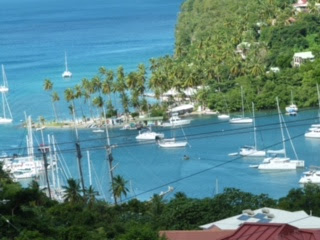 As we continued north, the traffic ground almost to a halt. Mitch was keen to get us to the final destination – Pigeon Island – and we made it, but it took 30 minutes longer than it should. We circled the National Park. It had been a lookout station when the French and English fought over St Lucia.

Sitting out in Rodney Bay at anchor were 2 cruise ships – a Thomson vessel, which I had seen earlier in the day on the horizon as it passed Castries, and the 4 masted Wind Star

We then set off on the journey south, but again met a traffic jam. Clearly the tour people at the ship were getting concerned because Mitch kept getting calls. When we did get back some 45 minutes late, it became clear why there was some anxiety. Three people in wheelchairs were waiting with their companions for another tour in the same vehicle! What a shame for them. Their trip would have been dramatically shortened.

As we drove through Castries, it was buzzing.