The approach to Oslo is stunning. After crossing the Skagerrak, we entered the Oslofjord, which at times is fairly narrow, but for the most part, tree lined. Wooden homes of all shapes, sizes and colours are dotted about amongst the trees. Some are holiday homes, but others are permanently occupied. 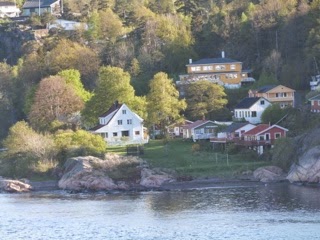 The journey along the fjord took us about three hours, but the sun had risen just before 5.00 am and it was a beautiful morning. We arrived on our berth on time at 10.00 am. 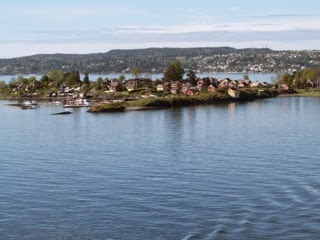 Jane and I first came to Oslo on the QE2 during the summer of 2004. We had had our first taste of cruising earlier that year when we had managed to get a cabin on the maiden voyage of Queen Mary 2. People were talking about the QE2 being pensioned off, as she was then nearly 40 years old, so we decided that we ought to take a cruise on her before that occurred. It was a Norwegian fjord cruise and Oslo was the first port of call.
We came back again in December 2007 on the maiden voyage of Queen Victoria. That voyage was billed as a Christmas Markets Cruise. There was snow on the ground and it was freezing cold and the Chritmas market was less than impressive!  I think Cunard realised that winter cruises to this part of the world are not a great idea. But in the summer Oslo and the Baltic are wonderful places to visit.
We also came to Oslo on Queen Elizabeth on a Baltic cruise in 2011. The highlight was, of course, St Petersburg but close behind was a place in Northern Germany called Travemunde. I reported on that day on the We Are Cunard website.
I have also been reminded by Helen Barnes that we did a North Cape cruise two years ago and that involved a visit to Oslo.
Oslo is a great place, with a multitude of museums and palaces. This time we walked in an easterly direction initially and then drifted to the west in search of the Ibsen museum where Ibsen lived for the last 11 years of his life. We eventually found it close to the Royal Palace. 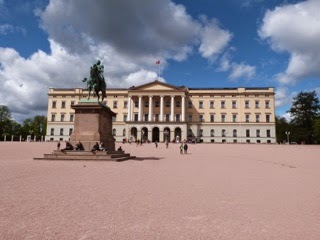 The Palace guards were happy to be photographed. 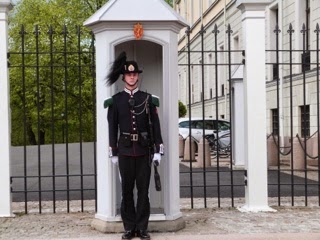 On Thursday we are in Copenhagen. Another great city.
Share: