It was two and a half sea days in reality. Jane and I love sea days. There is plenty going on around the ship, but if you want to do nothing but relax and watch the world go by, that is fine. Watching fellow passengers is a good game too. They come in all shapes and sizes.

The speakers finished their series of lectures in the Royal Court Theatre and, as there was a celebrity speaker aboard, a Q&A session hosted by the Entertainments Director took place. Lord Digby Jones fits into the celebrity category. 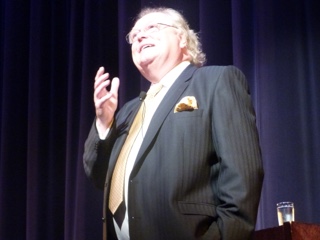 On Monday at 11.15 am the theatre was packed. Standing room only for the latecomers.

Jo Haley was the host and Digby was in his element. 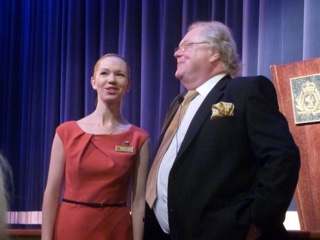 A few excellent questions from Jo to get the ball rolling and then it was opened to the audience. Questions on his views on everything from Europe to migrants to Corbyn to the lady Captain (those that were there will know what I mean!)

Digby is a big personality. The audience were probably ‘Middle England’ in the main. What he had to say corresponded with their views and they gave him a rapturous applause throughout. 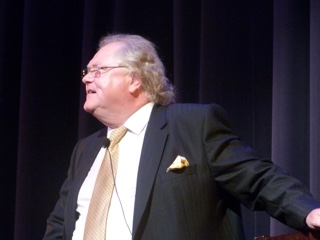 As the Bay of Biscay was fairly frisky on Sunday, the singers and dancers final show was postponed that evening. It was still considered too dangerous for them on Monday, so the final show before they disbanded didn’t happen. Their 8 month contract had come to an end and they will be replaced by new singers and a new troupe of dancers on the next voyage.
On Monday evening Jo Haley, the Entertainment Director, announced that she was moving to Queen Mary 2. A great shame, as we felt that she was a breath of fresh air and was a very polished and accomplished performer.
Tomorrow Southampton.
Share: