We were here 9 months ago and I reported on our visit in my November 2014 blog. 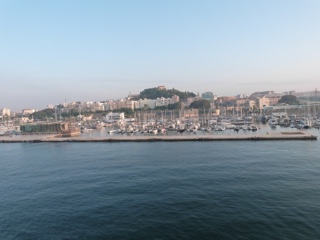 This time my knee was giving me some grief, so we decided not to return to the Roman Baths and the Roman Theatre which would have involved substantial walking. We did manage to cover a fair amount of ground, though, on the eastern side of the town.

There is some splendid architecture and the main street is immaculate. 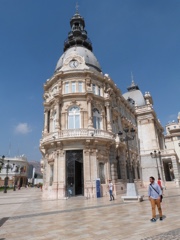 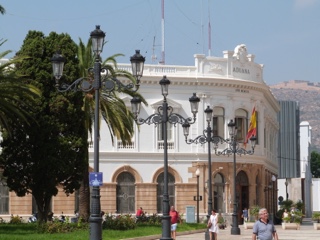 A super flat surface and traffic free. And we finished our tour with a beer, while overlooking the marina and the ship. I may have said this in the past, but ABP and the City of Southampton could learn a great deal from Cartegena about the way in which the waterfront should be developed back home. 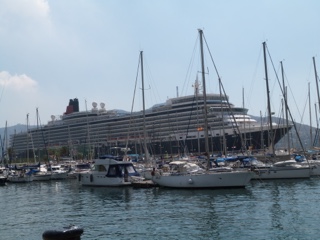 In the afternoon, I was entertained by a group of children being trained in racing techniques in their Optimist sailing dinghies. It was all happening within the marina just below our cabin. Some of them were very good and they were all clearly having a great time. It brought back so many memories of Christchurch harbour all those years ago! 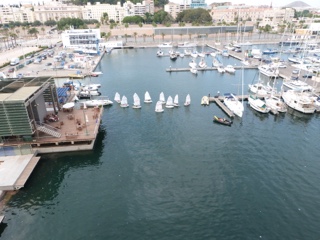 We heard that our visit to Gibraltar on Saturday would be a short one, with us all having to be back on board by 12.30pm. That didn’t worry me, but of course Jane always wants to see the apes and M&S – in that order. I think the apes are dirty, smelly animals. They leap onto your shoulders and head. They steal your specs, cameras, mobiles and rifle through your pockets. If you are stupid enough to be holding an ice cream, they pinch that and eat it!
But don’t be influenced by me! Next time you are in Gibraltar, go and have a look and let me know what you think.
On the day we walked the mile to the main square and then up Main Street. It was packed with locals and tourists. As we always seem to do, we bumped into John and Alan who had been much more adventurous than us and had walked for many miles. 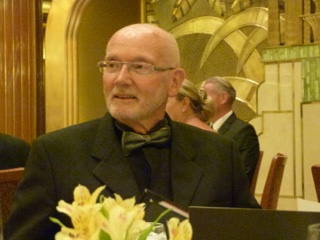 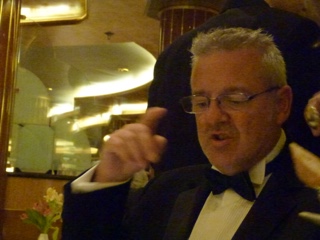 But Jane did get into M&S. I know how to treat a girl!

In the evening, at dinner, Tracey took a different view of the apes. She thought they were wonderful.  She clearly fell in love with the babies. 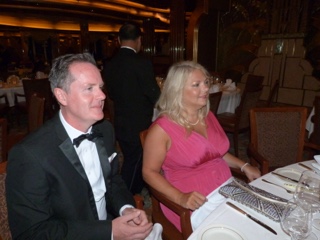