I can understand why you yachtsmen love to sail in the Ionian Sea. We arrived in Argostoli, the capital of Cephalonia, on Tuesday at 9.00 am. It was a beautiful day.

We were on the berth – a relatively new construction which appeared to have transformed the tourist industry on the island – and a Costa ship was at anchor outside us. 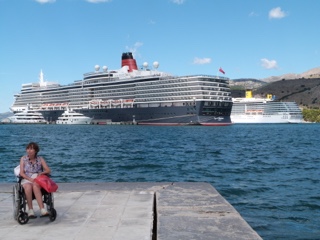 The Stoneham boys will be on the island shortly – or sailing nearby. Kelly, Barlow, Maunsell and Dixon. They will have a great time, but they all seem to me to be Captain material! Anyone any ideas on who the skipper will be? 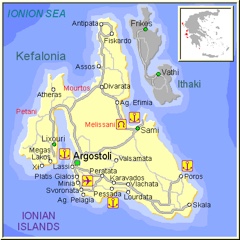 As many will know, Cephalonia is at the heart of an earthquake zone and dozens of tremors occur every year. In 1953 a massive earthquake destroyed all the major towns with the exception of Fiscardo in the north.
We did not travel far, nor did we suffer any tremors, but we loved Argostoli. There was plenty to do. Lovely small bars and restaurants. And clearly the planning authorities had been very careful in controlling the reconstruction of the town following the 1953 devastation. Clean and tidy with plenty of traffic free streets. And also numerous up market boutiques, which pleased Jane.
The port was popular with the jet set too. Didn’t actually see any of them but their toys and crew were ready for them. 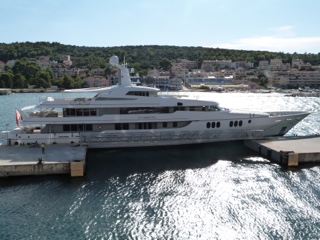 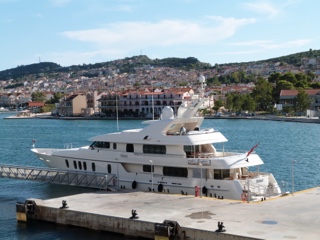