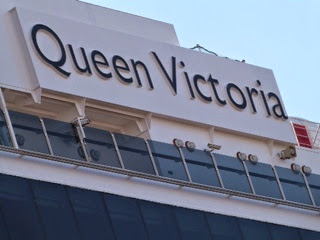 This is not easy but we will get through it! Five ports in five days. We are not trained for it. We like a port and then a few sea days to get some rest and build up the stamina with plenty of food and plenty of Malbec for me.

This is some sort of marathon. I should have studied the itinerary more carefully! So after Madeira and a lovely day in pretty Funchal we sailed away and woke up in Lanzarote.
Many of you know the island. Some of you have stayed there. We were intending to travel to the Western end of Lanzarote, but after being shuttled to Arrecife, we found the old town delightful and mooched around the back streets.
It was sunny and hot but we had to get back to the ship to get ready for a formal night and dinner at the Captains table. The Deputy Captain Simon Love was the host. He is the man who went to sea as a young man, but after marrying decided to go ashore and join the family business. Some 18 years later he was persuaded to return to sea and after retraining he joined Carnival. He must be well on his way to a command in the not too distant future. 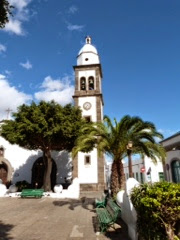