Last time we were at Cape Horn it was early evening – darkish, cold and windy. On that occasion we were sailing from the Pacific to the Atlantic, west to east and it was only during a lecture the day before that I heard that cruise ships rarely travel round Cape Horn by the obvious route around the bottom of the continent.

The winds and currents are considered to be too wild and changeable to risk the simple route. It was reported to me that for 200 days a year there are gale force winds and 50 foot waves in the region where the Atlantic and Pacific oceans meet and 130 days when fog and icebergs abound. 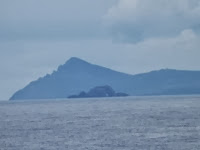 So I was resigned to the fact that on this occasion we would be using one of the other routes. Captain Inger Thorhauge managed to get the timing spot on despite the Argentinian authorities delaying our departure from Puerto Madryn by a couple of hours. She told us that we could expect to arrive at Cape Horn at about 1630 hours on Saturday and that she intended to travel round the island, on which Cape Horn sits, in an anti clockwise direction.
The bottom part of S America, Tierra del Fuego, is a vast island surrounded by hundreds of small islands. Cape Horn is on the southernmost of those small islands and there is a navigable channel round it. 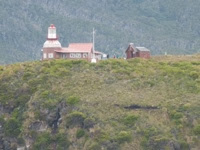 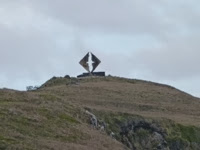 The sea was calm and the sun was shining as we approached the Cape. We could see the lighthouse and the lighthouse keepers home alongside. He lives there with his family on a six month contract. We could also see the Cape Horn Monument which sits 1400 feet above the sea. The monument’s two triangular bronze halves form the outine of an albatross. It stands there in memory of all those who have lost their lives in the waters off Cape Horn. More than 1000 ships and at least 15,000 lives have been lost there. 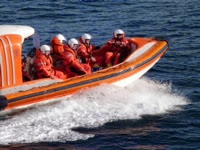 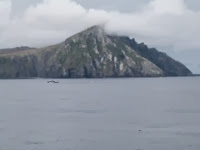 We could see two people by the lighthouse and they waved a flag and then climbed down a set of wooden stairs to a small beach. At the same time a high speed rib left the ship and sped across to the beach to record the QV’s visit there. We left them there and carried on round the island eventually facing the rockface of the Horn itself. After about 2 hours in the vicinity and after collecting the crew of the rib, we set sail for the Beagle Channel and our next port, Ushuiai. It was a great spectacle and we were very lucky to be there on such a beautiful day.
Share: