That’s what the cruise is called and we are on our way. Bright and early start with no mishaps apart from the missing jacket. Everything done. House left clean and tidy (by my standards) for Linda, our house sitter. I even remembered where the Hoover was kept and how to use it. I remember getting the jacket off the hanger, but just as we were about to leave, the jacket had gone. The conclusion reached by the others was that I must have packed it. Searched everywhere, no joy. Linda will no doubt spot it as soon as she arrives.

There were only 2 cruise ships in so the journey was easy with me in Martin’s taxi with all the luggage and Ian Gordon following, driving the Vauxhall with Jane aboard.
A little subterfuge found us at the head of the check in queue and quickly sitting with Stewart and Elizabeth Wilson waiting for the signal to board. In our cabin by 12.05 pm must be another world record.
And this time it was not “who you know”, as it was when Annie Guy or Sandy Gravestock were on duty, but “what you know” – nipping past the awkward meeters and greeters when they were looking the other way.
We first met Stewart and Elizabeth at the Captain’s table on the maiden voyage of Queen Victoria in December 2007. Stewart and I were sitting either side of a tall, attractive lady. I had established that she was the Captain’s wife, but Stewart did not know that and asked her if she liked cruising. She and I led him along for some time and he has never really forgotten or forgiven me for winding him up.
Stewart puts together wonderful stamp collections made up of stamps from around the world featuring Cunard ships. He is also a great Cunard historian and the narratives in the albums record a wide variety of facts about the ships and their careers. Stewart has donated a number of the albums to Cunard and each ship displays two of the albums in glass cases in their libraries. The librarians turn the pages each day.
During lunch on Monday, we bumped into John and Pat from Sheffield. We had dined with them on the Queen Victoria last year. They told us they had been on the segment of this years World voyage from San Francisco to Auckland and had met up with the Stafford twins and joined their table for some of the voyage.
The weather was wonderful as we set off, on time, down Southampton Water. Eight days ago I was travelling over the same stretch of water at some 40 knots. Queen Elizabeth peaked at about 15!
Daylight departures are rare for us. Here are one or two buildings and views. Does anyone know what they are? Answers in ‘Comments’ on the blog please. A fog kept rolling in and out but the sun shone as well. 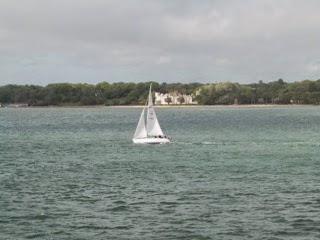 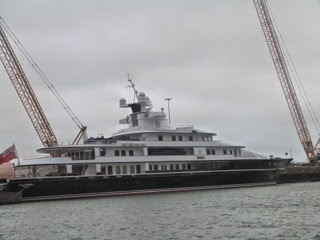 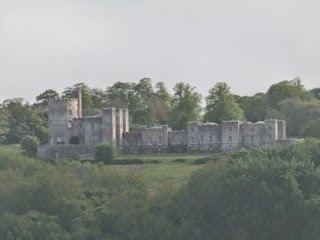 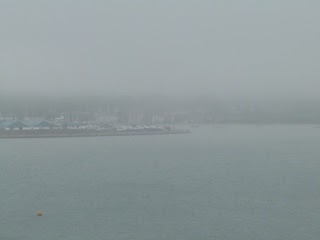 It was very foggy here! 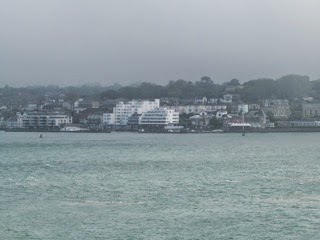 We sat with some Australians from Sydney at lunch. They told us that there were 460 Australians aboard. Apparently, last year a travel agent in Oz advertised a package which took in 5 days on QV, a night in the De Vere in Southampton, followed by this cruise on QE. Then on 25 May when this ship arrives back in Southampton they move across to Queen Mary 2 which takes them to New York. They then fly back to Sydney.
Share: