I have a particular attachment to Queen Elizabeth because my father, the late Captain George Smith was one of only three men who were Captain of both the original Queen Elizabeth and the QE2. My wife and I were aboard Queen Elizabeth for her maiden voyage in October and are now enjoying the voyage to the Baltic capitals and St Petersburg.

I am reporting on our visit to Travemunde, it was not in the original itinerary but it was an inspired addition. It was a maiden call and at 7.00 am as we approached land the sun was shining and the sky was clear and blue. There were beaches to the left and to the right of the river and there were vast numbers of people on the beaches welcoming our arrival. 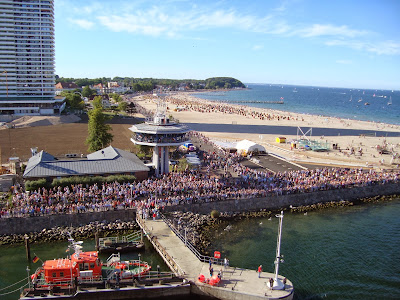 As we began to travel up the river to our berth there were thousands of people at every vantage point waving and shouting. Those aboard quickly realised that something very special was happening and it all became very emotional when ‘God save the Queen’ rang out from the shore on both sides of the river over and over again. 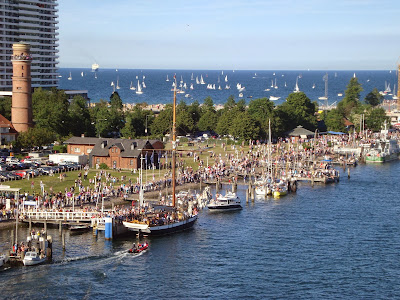 We reached our berth on time at 8.00 am and enjoyed a wonderful day in Travemunde and the surrounding area of Lubeck. Travemunde is immaculate – a resort town with boutiques, shops and bars and is clearly a popular holiday spot.

Throughout the day, boats of all shapes and sizes sailed by Queen Elizabeth, which we were told later was the largest passenger ship to have visited the port. 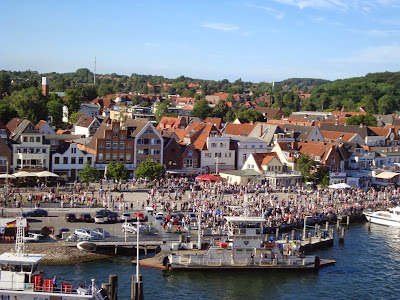 Our departure proved to be more emotional than our arrival. Captain Christopher Wells told us that it had been estimated that 20,000 people had greeted our arrival and that in the early hours of the morning there had been major traffic jams in the town. In the evening there must have been 3 or 4 times that number watching our departure. 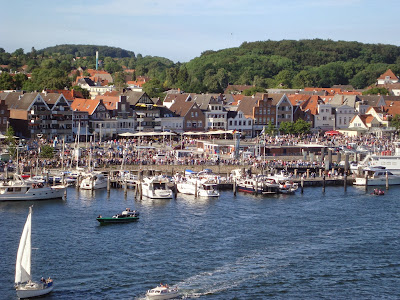 As we proceeded down the river there were people crammed on to every vantage point. Jetties were packed and people were 10 or more deep along both river banks for miles. And it was a joyful occasion with those ashore and those on the ship waving and clapping. Again ‘God save the Queen’ rang out from both sides of the river.

Hundreds of boats formed a flotilla which followed us out to sea, gently kept under control by police boats. 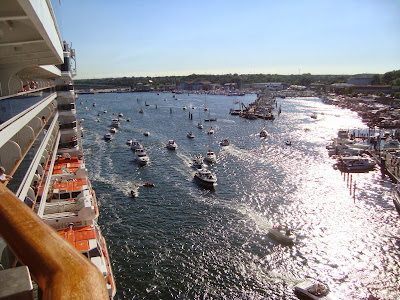 It was clear that the visit of Queen Elizabeth to Travemunde was a stunning success. It brought great joy to the people of Travemunde and the surrounding area. It was a very emotional day for us and for those in that northern part of Germany.