Our next port is Puerto Madryn, Argentina where we are due tomorrow, but there are apparently problems there including some sort of blockade of the port. The Captain reported in her regular noon broadcast that there was a potential difficulty. The problems that she faced were that she has a number of passengers who are due to leave the ship there, she also has a group who have booked a 4 day tour of Patagonia returning to the ship in Ushuaia. And she needs to take on 2 Chilean pilots to assist her in navigating the waters off Cape Horn and through the Beagle Channel.

I know there were problems for cruise liners last year in getting in to Puerto Madryn if they had been to the Falklands or were going there later but whether this is related to that we do not know. We are not due to go there on this trip.
The Captain has updated us. We will go into the port in the early afternoon and we have apparently been given assurances that the ship will be allowed to leave! It will allow those who are due to leave the ship to disembark and importantly it will enable us to get the Chilean pilots on board. We will not, for our own safety we are told, be able to go ashore.
While we were in Buenos Aires on Tuesday there were massive traffic jams which meant that our taxi driver only received US$10, the agreed fare, for a ride that should have taken 10 minutes but in the event took an hour. When he dropped us off there was a large demonstration nearby which blocked the road and the flags being waved referred to Navales – which I think related to the present dispute. No doubt your access to the news is better than ours and if you could email me to let me know what it is all about – or make a comment in the appropriate place on the blog, that would be even better because it would update the 74,027 readers of the blog!
I think I have a photo of the demo in BA which I will add.
No wonder Captain Peter Philpott, who left the ship in Rio to go on leave will be pleased that he has avoided this hot potato! 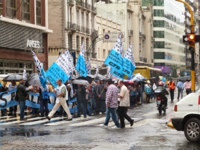