After leaving Vigo, we sailed south, running parallel with the coasts of Spain and Portugal. We rounded Cape St Vincent, hoping to see Roger and Jill Wilson waving, but there was no sign of them. Then we were through the Straits of Gibraltar and heading east some 35 miles from the coasts of Morroco, Algeria and Tunsia.

It was a three day voyage to our next port – Messina. Three sea days with some average weather and some sunny half days. I thought it would hot and sunny throughout, as it was 2 weeks ago, but we are promised much better temperatures in the days to come as we move east. 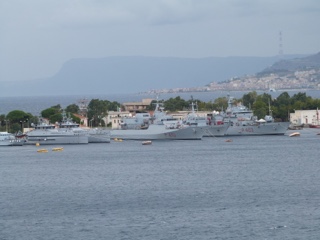 The harbour at Messina. 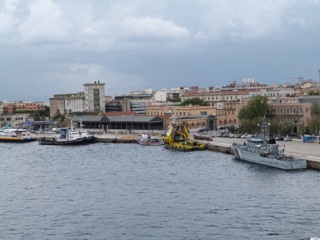 Cunard failed to come up with any suitable transport in Messina. One day they will realise that some people cannot climb the steps into a coach and need coaches that have lifts or ramps. They exist in all the countries that we are visiting, but it would appear that making a profit on every tour they organise is more important than keeping people like us happy.
So we had to resort to a taxi. We want a driver who can speak English we said to the taxi gangmaster at the quayside. He gathered the drivers together and after some arguments pushed Sandy forward. 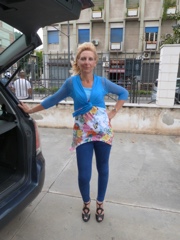 Blonde with very long legs and aged 25 (she said). I think that the gangmaster thought I would be swayed because of her looks, despite her English being virtually non existent. It worked!
The plan was to be taken to the pretty Taormina, some 30 miles south, spend an hour or two exploring the little town and then returning for a tour round Messina. Sandy made it all possible by driving fast but carefully for 35 minutes each way.
Taormina is 700 feet above sea level, overlooking a beautiful coastline. 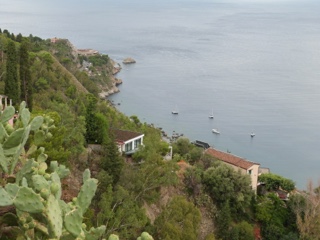 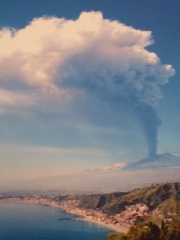 Mount Etna sits in the background.

Taormina was full of tourists of all nationalities. It is the most popular tourist attraction in Sicily and its narrow streets have top of the range shops intermingled with tat. 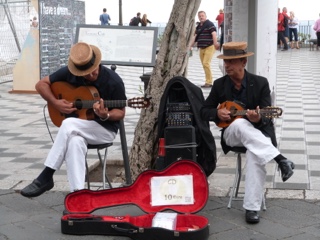 There are some beautiful buildings – the Greco-Roman theatre, the Corvaja Palace and the Cathedral. 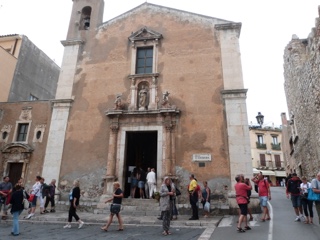 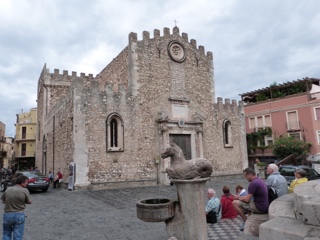 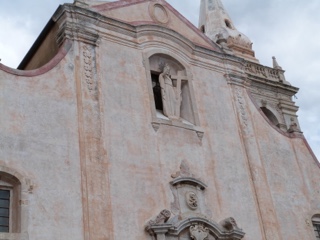 Sandy met us at the agreed time and place at the end of our allotted time and we blocked the traffic for a while as we poured Jane into the taxi and stored the wheelchair. Sandy didn’t appear to have seen a folding wheelchair before, which convinced me that in the Mafia riddled island, she was probably a gangsters moll rather than a cab driver!

After a fast dash back to Messina we toured the city, and took in a local wedding. Jane likes them. 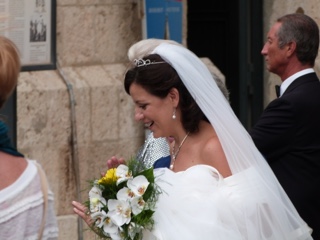 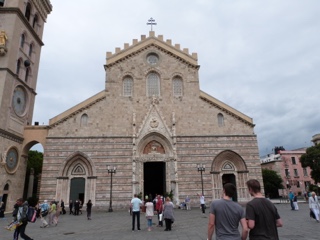 The church in the square. 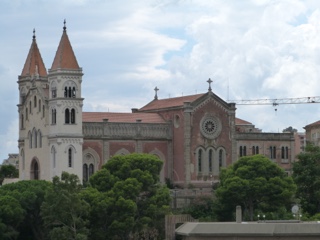 The Cathedral
I am sorry that I have not been live on the blog in recent days but there was a problem with Blogspot that I couldn’t  resolve without notes that I had stupidly left at home. Sam in London had set up the blog in the first place 2 years ago and a couple of emails from him today quickly resolved the problem. Thank you Sam. You are a star!
Share: