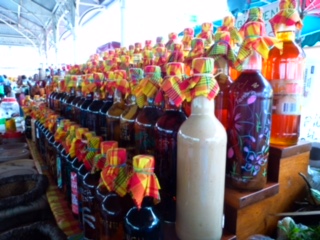 Columbus landed on Guadeloupe in 1494. The Spanish tried to settle there, but the Caribs beat them away. The French were more successful and defeated the Caribs in 1635. 500 French colonists settled there and soon introduced African slaves to work the sugar plantations.

In 1946 Guadeloupe became a Department of France and in 1974, Guadeloupe and other islands were constituted as a region of France.

So that’s the background. Why am I telling you this? Regrettably it poured with rain all day. It was a maiden call for QV and a very disappointing one. In a brief break in the downpour, we ventured into the town, Pointe-a-Pitre.

It was not a pretty place. Poor pavements, high pavements and a total lack of dropped kerbs made it difficult to make progress with a wheelchair. Eventually we came across a square, with a pretty market – pretty because the majority of the goods for sale were colourful bottles of rum and rum punches.