The original itinerary was for Queen Elizabeth to arrive in Monaco this morning (Sunday), staying overnight and leaving on Monday afternoon. The ship was to be on the berth today and was then to move to an anchorage, so that tenders would have been required to get us to and from the ship on Monday.

Nothing particularly odd about using tenders, but the problem for us is that Jane, and anyone else who cannot walk onto a tender, has to remain on the ship. So that Jane would not have been able to go ashore at all on Monday. 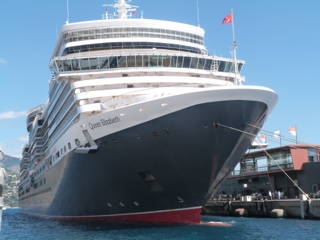 I can only assume that Cunard decided that it was important that Jane was not inconvenienced, because suddenly the Captain announced that we would be leaving Monaco tonight at midnight. During the night we will sail to Toulon, where there is a berth available, which means Monday ashore in Toulon – a new port for us.
But I am getting ahead of myself. First I need to tell you about our day in Barcelona. It didn’t start very well because there was only one shuttle bus which took wheelchairs, and it had just left. So we took a taxi into the city. The plan was to explore the side streets on the right side of Las Ramblas. We did that and made the inevitable forays into pretty little shoe shops, but they did not present us with the right sort of pink shoe that Jane “needed”.
I was convinced that we would eventually find the shop 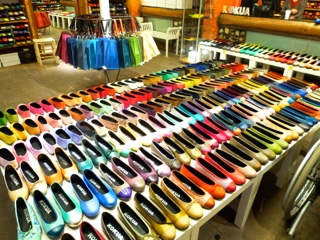 that I loved last year – but we did not and that was my mistake (and my fault, of course). We ended up with no shoe purchase.

In our travels we did find the 4 Gats restaurant- a favourite of mine – but shoes were more important at that stage and I had to walk by. 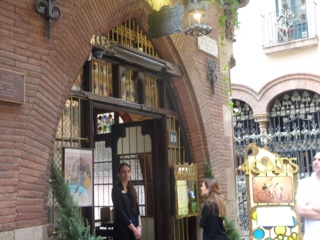 We had a coffee in a small square and some young locals put on a brief gymnastic show in front of us. It was brilliant. They moved round the square performing and then passing round a hat. 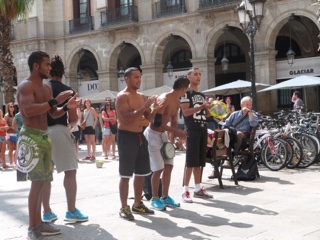 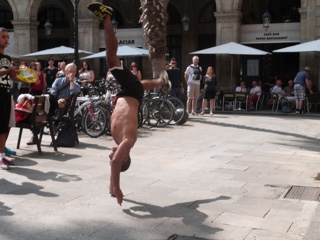 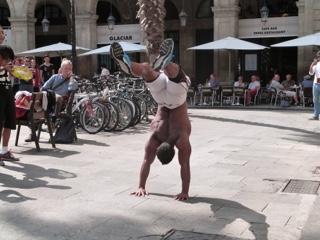 We also found a bride being driven to her wedding in a cream MGA. The driver appeared to be her father. He had some problems driving the car but we later saw it outside a church, so they must have made it to the ceremony eventually. 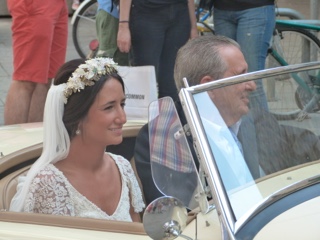 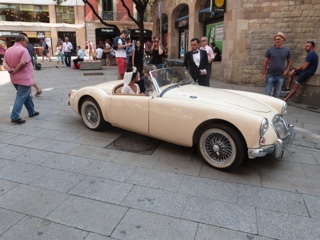 It was a great day. The weather was perfect – sunny but comfortable. The only downside was my failure on the shoe front.
Share: