Remembrance Sunday – 9 November 2014. We are excited to be joining Queen Victoria again for two back to back cruises, the first to the Canaries and the second to the Western Med.

Linda is again housesitting for us which is great for us and hopefully it is for her as well.
Ian Gordon kindly drove Jane and her powered chair to the ship in the adapted Vauxhall, while I accompanied the luggage in Mark’s smart new Mercedes. Sunday was a beautiful sunny day and we were on the ship within 90 minutes of leaving home.
The last time that we boarded a ship on Remembrance Day was in 2008. It was for QE2’s final voyage to Dubai.
You may recall the story. It was nearly 11.00 am when I remembered that a small plane was due to fly over the ship and drop a million poppy petals. The only way to see the sky was to get ourselves out of the terminal. I ran, pushing Jane in her wheelchair, and we arrived at the exit just in time to see the plane and poppies.
When I returned to the terminal, Sandy Gravestock (a friend from Mudeford days in the early sixties!), who was in charge of the ‘meeters and greeters’, scolded me, pointing out that I was the only person in the terminal building not standing to attemtion for the two minutes silence!
We have 3 days at sea before our first port – Madeira – which strangely was our last port back in April, but more of that later. 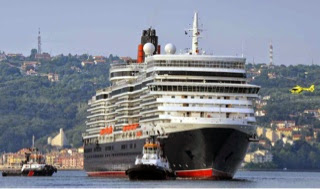