Last year we were in Lisbon and it poured with rain. We had bought Hop on Hop off tickets on the ship because the adverts said the buses had ramps and were wheelchair friendly. They were not and we got our money back.

This year I had found out that Cunard were organising, out of their Southampton Office, wheelchair friendly tours in some ports. I booked us on line onto an expensive coach and boat tour in Lisbon. It was confirmed subject to enough others booking. Last night no tickets had arrived and the efficient on board Port Presenter, Matthew, made enquiries and found that insufficient others had booked and the tour would not be taking place. It was a pity no one from the Southampton shore mobility office thought of telling us! As you can imagine, I will have more to say on this in due course.
We left the ship with the intention of finding a taxi man who spoke decent English. As we walked out of  the Terminal building there he was. Smart dark suit. Excellent English. Not too pushy. And the major selling point – a brand new black Mercedes people mover! 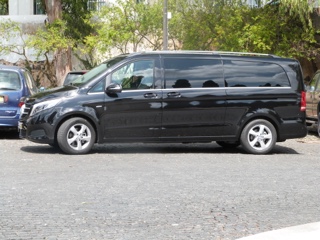 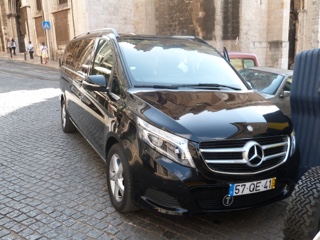 No doubt Robert Gordon of Mercedes in Melborne will be able to tell us the model. As the driver (we failed to get his name) had been there all morning without a punter, the fee for 2 hours (which turned out to be 30 minutes less than that!) was very reasonable. It was a really great tour. He took us down some of the really narrow streets in the old town. 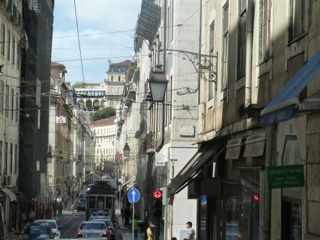 We were amazed by the large number of Tuk Tuks in the old town area. Our driver was very upset by them. He said they charged more than he did, paid little or no tax and yet were legitimate because the local statutes didn’t legislate for such vehicles. He said they had arrived in Lisbon because of the high level of unemployment and the fact that young people could earn a living by buying such a vehicle cheaply. They were in the main driven by youngish girls. 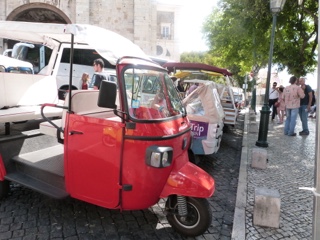 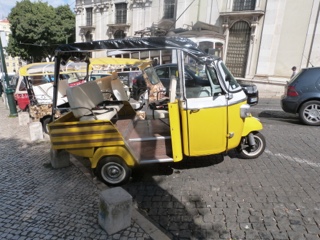 In the old town area you had to watch out for the trams. And if you are on a tram, you need to watch out for pickpockets and bag snatchers. As we crawled along in a traffic jam at one stage, the driver pointed out some undercover cops walking between the trams and seeking out known thieves. 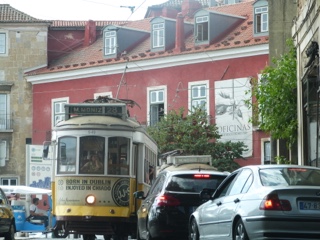 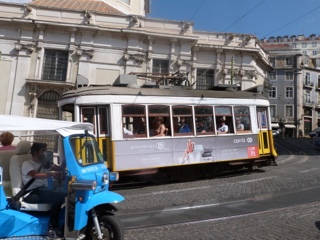 From the old town we moved to the more modern areas further north and the magnificent squares leading to the Avenida da Liberdade and then further west on our way down to Belem (Bethlehem) and the Monument to the Discoveries commemorating Henry the Navigator. 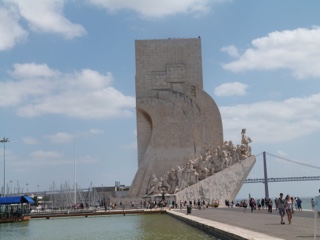 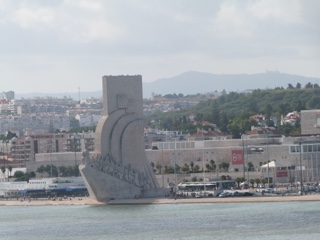 As we sailed away later that day I managed to get a photo from the ship. The same with the Torre de Belem, the fortress built to guard the approach to the city by water. 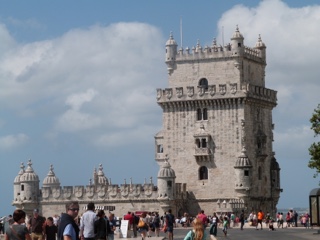 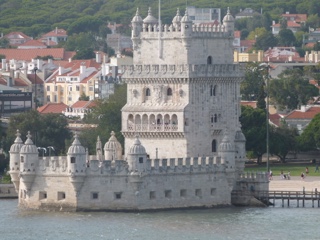 It was a brilliant day. The best day we have ever had in Lisbon. It even surpassed the day I had in the city as a student in 1967 on a 14 day cruise on the Carmania (staff rates were £2 a day at the time – £28 for a fortnights cruise all found). That was in the days of Salazar’s dictatorship and Portuguese students were scared to talk to us about the regime in case they were overheard by the secret police.
Tomorrow Cadiz. Our first visit.
Share: